MNN.  Oct. 5, 2012.  Presidential boxing matches are fixed.  Always have been.  Both Obama and Romney are actors in the theatre called politics, playing out the corporate fiction.   The US presidential debate is a show for the masses to continue the illusion of freedom in the pretend democracy.   The 3-round boxing match is between two members of the same club.  Both are puppets on strings with the same puppet master.

Romney is an elite protagonist trained in private schools.  He goes by their fixed rules.  In days of old, there would be a pistol duel where they would go 50 paces, turn and shoot.  Winner take all!  Romney has probably never been in a street fight.  Private school pretend fights are arranged and decided who will win.

In the current US presidential debate, they are supposed to be gentlemen in an Honorable duel where they don’t fatally hurt each other.

Obama comes from a similar private school background.  Being Black he probably had a few street fights.

In round one, Obama looked downward, avoiding Romney’s eyes, and did not give himself away.  Romney danced around, jumping, swinging, jabbing and taking lots of shots.  Obama watched and stayed focused. 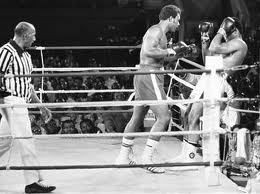 This reminds us of one of the greatest fights ever, Ali’s strategy in 1974’s “Rumble in the Jungle”.  Ali laid on the ropes, letting Foreman punch the s–t out of him for 5 rounds.  People were screaming, “Ali, get off the ropes.  You gonna die!’  He let Foreman punch himself out.  Then in the 15th round Ali came off the ropes swinging and knocked Foreman out.

Everyone thinks Obama is dead and counted out.  It’s the end of him.  Like Ali, he is using the ropes.  His supporters are yelling, “Get off the ropes!”  In the 3rd round he is going to come off the ropes swinging.  By that time Romney will have punched himself out with all his yelling, bragging and dancing around. Just like Foreman did.

Romney will be tired.  Obama will keep using the ropes to save his energy for the final round.  Obama will come off swinging and knock him out, just like Ali did to Foreman.  Remember, Ali floated like a butterfly and stung like a bee.

The prize.  Which dope gets the job to kill babies, men, women and children?