MNN. Mar. 10, 2013. The Vatican is going through hierarchical highs and lows, mostly lows. Picking a new Pope is almost like a funeral to bury the biggest heist of minds and money in history. Notice no women are involved. Millions are flocking to Rome to see the smoke signal. The German former SS officer who made it to the top might even become a saint. 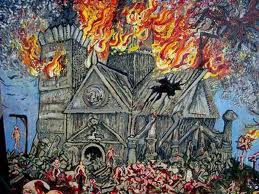 The Pope represents the Christian dream of holy perfection on earth, until he quit. They have to find someone who can keep controlling the masses, intellectually, spiritually, financially. The Pope has to keep supporting his friends, the banker warlords. Selfish and egotistical men have to stay in control.

Corruption is caused by patriarchy. Its goal is to break the link between women and the earth. The papacy helped create colonialism. Church and government are still working together trying to control us and pervert the natural intellect.

Why are people worried about the pope’s resignation? People don’t know how to use their own power. They are looking for someone to give them some power. The power is the fire burning in their owns minds, in all of us. 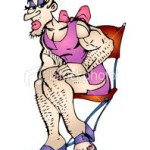 Shorter dresses for the priests!

Live satellite coverage of the occasion in Rome shows nothing but men everywhere wearing dresses. Women are seen among the lay “pilgrims” and the “faithful”. The main visual impression left is that men have done a good job of taking over the world and eliminating women from positions of honor. They are the handmaidens who have the kids, do the scrubbing and baking. Women have to be put down so these men can live with their own impotence. Those dried up celibate cardinals, bishops and priests are not going to keep the world going, that’s for sure. They’re having a tough time just keeping their Church going.

It’s partly about money to keep themselves on easy street, five star hotels and the jet set lifestyle. They travel the world to secure their land holdings that they never paid for and never paid tax ever anywhere. Their hands are always out to fleece the sheep. 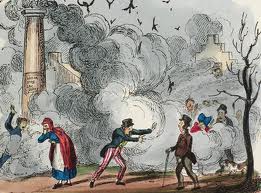 The sheeple worldwide are waiting for the different color of smoke to come from the chimneys at the Sistine Chapel. They feel comforted that the smoke will continue to be in their eyes, Instead of turning to the fire within their own minds. Christians, it is you that you are waiting for.

As Jimi Hendrix sang in “House Burning Down”: Well, I asked my friend, “Where is that black smoke coming from?” He just coughed and changed the subject. Said, “Wha’, I think it might snow some”. So I left him sipping his tea and jumped in my chariot and rode off to see just why and who could it be this time. Look at the sky turn a hellfire red. Somebody’s house is burning down, down, down, down.  House burning down