MNN. Apr. 11, 2013 To derail the occupation forces, we must understand their corporate strategy and then build resistance. The following is the breakdown of the strategy they have in place. Our strength is in our own minds.

1. Get organized. Corporations answer to the City of London  multinational bankers who give the orders to the politicians.

2. Think Tanks. Fraser and C.D. Howe Institutes create ‘expert’ opinions and train academics to spout them, which are continuously publicized until the public starts to believe them. 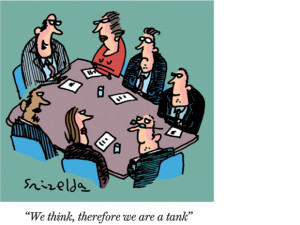 3. Spokespeople are created and promoted through media and quoted by academics. 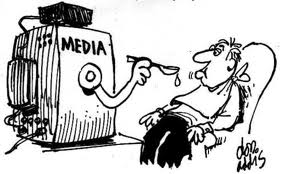 6. Control all political parties. They all advance the corporate agenda.

7. Corporate Mobility. Politicians push through agreements so corporations can globally exploit the cheapest labor, lowest taxes and to get rid of Canadian workers.

9. Dismantle public sector. Demonize the debt/deficit crisis so corporations and their politicians can slash social programs. 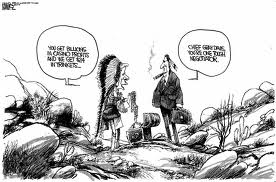 -“You get billions in casino profits and we get $24 in trinkets”.
-“Chief, you’re one tough negotiator”.

11. Curb organized labor by wage      freezes and other threats.

13. Preserve the illusion of democracy. 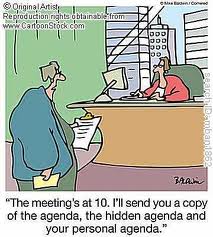 Any structure can be brought down. Every opposing action or critique brings closer the time when the occupying army will be thrown out. Social justice does not come from being passive. We have to struggle as individuals and members of larger communities until we win. Our acts of defiance and resistance are the building blocks of solidarity. As Ella Fitzgerald sang:  “Broadway’s turning into Coney, Champagne Charlies drinking gin. Old New York is new and phoney. Give it back to the Indians“.