WOMEN, PUT YOUR BOOTS ON!

MNN. FEB. 15, 2013. Elimination of Indigenous women is government policy. We are being sacrificed for private profit. The bankers fear the women as the owners of the land and for having the power to stop the war. Who created the misconceptions of Indigenous women? Fur traders, whisky traders, North-West Mounted Police, Indian Agents, government officials, farmers, ranchers, missionaries and land speculators. 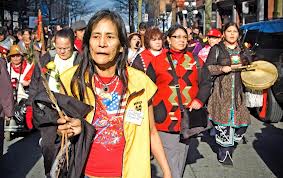 Wealth comes from stealing and controlling our land. We have to be destroyed in any way possible. Powerful negative stereotypes are promoted on the mainstream media. 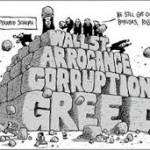 It’s all coming down.

At the Albany Congress 1754 the Haudenosaunee tried to teach the pre-revolutionary American colonists about democracy through the Great Law of Peace and the egalitarian role of women. The pioneers did not want their women to know about their real power nor to give them a place in decision making. The attack on us is to break our power.

Human Right Watch Report “Then You Take Us Away: Abusive Policing and Failures – Protection of Indigenous Women and Girls in Northern British Columbia, Canada” is about government sanctioned RCMP brutality toward young Indigenous women and girls.

Prime Minister Harper advised the brutalized and raped victims to file their complaints with their rapists, the RCMP. He is complicit in genocide and will be tried in the International Criminal Court. His inhuman response shows the flaws of the business plan of the corporate system to take over the earth. The recent take-down of the Pope at the Vatican represents the end of the male hierarchical control grid. The rest will crumble, the monarchies, corporations, and all their entities.

We will find you!

The women have a sacred trust as progenitors of the land. Our mother is now calling us to connect with each other and retrieve the instructions that exist deep within us. The songs and dances we perform are our medicine, Ononkwa, invoking the power of the original instructions that lie within.

We are connected through our subconscious. Our ceremonies remind us to stay on the winding route in unison and harmony with one another, in the same direction.

The Kaianereh’ko:wa is nature, a “clearly defined perfect reality”. It is “right, perfect and wise”. The man-made reality of the Euro American is disharmonious with nature, an Artifice.

Dekanawida, the Peacemaker, had the greatest influence on the world. Jigonsaseh, a woman, was the leader of the cultivators, with whom the Peacemaker had to deal. She was recognized as the Mother of Nations. She reminded him of the power of women as the basic tenet of the Great Law.

Creation is the ultimate wisdom. It is ancient and advanced at the same time. It is already here. Original people, let us protect our girls and women so they may carry out their duties in the natural way. 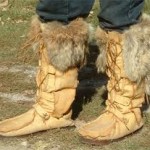 As Nancy Sinatra sang in “These Boots”:  “I’ve just found a brand new box of matches, yeah. And what he know you ain’t had time to learn. Are you ready, boots? Start walking!”These boots