MNN. Feb. 16/13. Fundamentalist whites think they are always right. Prime Minister Harper cruelly and coldly told Indigenous women victims of horrific assault and sexual abuse crimes by the RCMP to go to their rapists to file reports. This is a disrespectful white privilege remark to fuel racism.

When we walk into a store at the same time as a white person, the security guard follows us and leaves them alone to shop.

When a white persons tries to get into a school, applies for a job, or hunts for an apartment, they get it because they are white and don’t look threatening. The person dishing out the privilege is usually white. White privilege also means scores of second rate white people slide through the system because their ignorance and flaws are overlooked. This has obviously lead to mediocrity of brains and talent in high places. 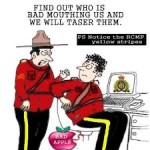 Whites benefit from living in a world they designed, mostly run by white people that has been built on our land. They always say they did not personally take the land, but continue to benefit from its possession and fruits. To do this they inflict systemic racism and lawlessness on the land owners.

We always point out white privilege. No one listens to us unless a white person says it in mainstream media.  Otherwise the masses do not believe it. Historically, on MSM 4 bad stories for every good one on Indigenous to fuel racism.

Here are some of the white insights into the issue: white privilege can’t be changed. They say affirmative action has made being white a disadvantage! It’s natural. White privilege is a good thing because white Europeans have civilized the world. Whites are inherently superior. Any white who says differently is a weakling and a traitor.

They’re adamant about keeping their white privilege. They are concerned about any of the settlers who are starting to stand against the genocide.

White privilege is not merit. It is unearned. When we Indigenous seek a job, an apartment or a position in school and we are turned down, it’s because we are Indigenous. Unqualified whites will generally be put ahead of us on most lists. 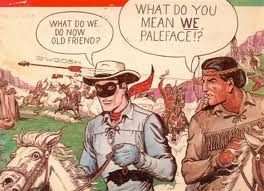 Kemosabe! When smoke come over big mountain 3 times, I will return.

As Procol Harum sang: “And so it was that later, as the miller told his tale, that her face, at first just ghostly, turned a whiter shade of pale”. Whiter Shade of Pale