MNN. July 11, 2014. Regarding the INDIAN TRUST FUND, I’m not requesting anything that’s not mine. But I am demanding everything that is. The fund is more than $970 trillion. My share is at least $470 million. As a Mohawk woman, I have a duty to protect the people and the land. My authority comes from Kaianerekowa, Wampum 44, the law of the land of Onowaregeh/Great Turtle Island. 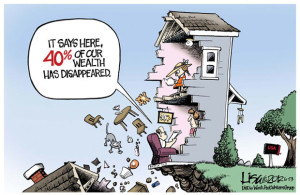 “Soon it’ll be more when everything we stole goes back to the Indians!”

The Guswentha/Two Row Wampum Agreement gave the Europeans permission to live here. We taught them to sustain themselves and to never forget that this land and everything on it belongs to us. When Canada wanted independence, the Queen could not give what belongs to us. She reaffirmed the Two Row Agreement on her last two trips to Canada. We can never transfer this land on which we are naturally placed. The Europeans can make laws only for themselves.

The British took over the Dutch colony in 1684. After the Great Peace of Montreal in 1701 the British accepted the conditions of the Two Row Wampum in Albany in 1701. They came and settled in Kingston Ontario which consummated the agreement. The British wrote their own interpretation of the Two Row Agreement called the Beaver Hunting Ground Treaty and the Nanfan Treaty. They never published it to anyone but themselves. We have a copy.

The British agreed that everything they did with our land and our resources would be shared with us, 50-50. The Indian Trust Fund is now the largest trust fund in the world.

The settlers needed our permission to live in certain areas. They agreed to remain on that land only. Otherwise it reverts to the Nation. We can take any resources, trees, hunt and fish at anytime on our lands. They could not dig deeper than the depth of a plow. Our permission was needed to build a basement and a well.

They could set up a corporation for themselves but could not claim ownership of anything that is not theirs. 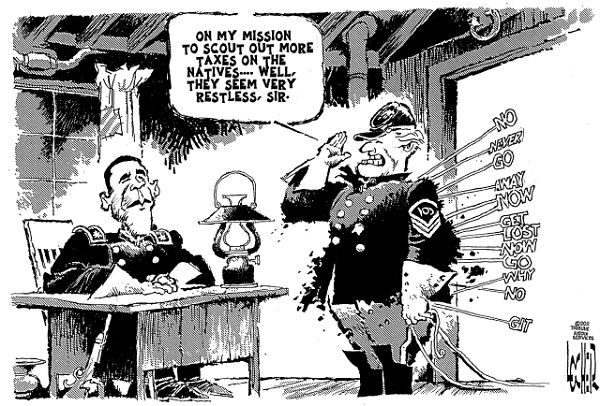 The Indian Trust Fund and Two Row Wampum are still in play. We want recompense for every single thing that was illegally taken and converted into money, such as trees, rocks, minerals, oils, etc. since 1701. These settlers came from a society that uses currency which we now understand. We demand full payment. We never gave the settlers permission to put our share in trust. This scheme to steal our possessions was devised by declaring us as incompetent by the Corporation known as the Vatican.

We never sold or leased anything above and below the ground. This income is ongoing. Interest is accumulating daily. Our fund subsidizes universities, hospitals, railways, corporations, infrastructure, exploration, municipal, provincial and federal governments, etc. Canadians created money with our resources, never giving us anything, keeping us in abject poverty.

We Ongwehonwe were never asked our consent for any development or raping of our territories. All the families of the Iroquois Confederacy and our friends and allies have to agree to anything that is done to our land. Our chiefs and clan mothers were murdered to break our circles of authority. The head of our people was cut off so the body would die. The next day there were more chiefs and clan mothers. The people are the government. We will stand up and hold our arms tighter around the circle.

I and all our people on Great Turtle Island are owed our share of the total Indian Trust Fund from 1701. I am almost 75 years old. I was always told by my ancestors, “They can’t give the land back to us because it’s already ours”. The artificial creation called “title” is nothing more than a statute under their Admiralty Law which is for banks and corporations. It ‘s been proven to be based on the “Doctrine of Discovery” which is nothing more than “a legal fiction”. We are the inherent sovereigns of Great Turtle Island. We will receive half of everything they created from our land and resources. I wish to be cashed out of the Trust Fund. 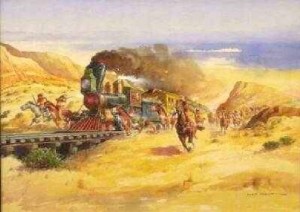 CN Rail going through Tyendinaga. “You bet! We’re going to get the Indian Trust Fund and everything else that belongs to us!”

Our prophecy of the serpents warns us the time is coming when the serpents will be washed away. What is the value of Canada since 1701? Half of everything that was ever produced from our resources belongs to us. I want my share. 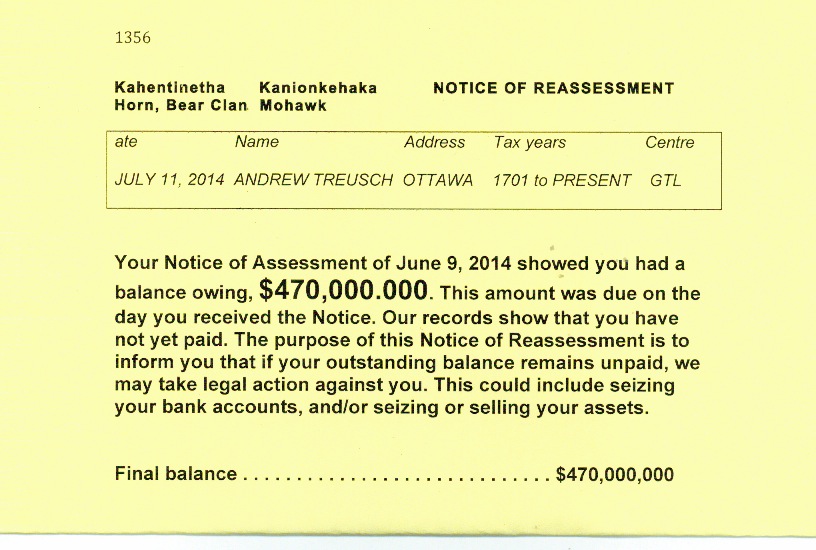 3 thoughts on “CASHING OUT!”