MNN.  Feb. 7, 2013.  Do not join the Canadian or US military.  Europeans have a strategy of putting Indigenous People in the galley of the ships to seek their fortunes and world domination agenda.  You should not help these monsters make holes in the hulls of our ancestral canoes to try to get control over the whole river of life. 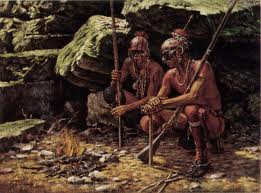 First, corporations create poverty and desperation among our people.  The youth have to either commit suicide with drugs and alcohol. Or the government suggests an honorable way out.  “Defend your country”, “Be a hero”. They need cannon fodder for their illegal wars.

Once you slap on that uniform, you belong to them. They are recruiting  you to commit the same crimes that they committed against us.  Middle Eastern people are not our enemies.

You will be made to kill dark skinned people and steal their land and resources.  The weapons you fire are designed to kill the victims and to contaminate you so you have an early death.  They want to cut down on medical bills and pensions.  You don’t even know the greedy bankers you are fighting for.

After centuries of genocide they want you to fill up their armies to die on their sinking ship.  You may be ordered to kill your own people, men, women and babies!  Our mind, body and energy are tied to our land.  You are going to be told lies to make you hate the people you are going to be ordered to slaughter.  Many of you will die. 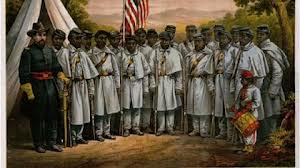 US recruitment of Buffalo Soldiers to murder Indians.

The cartels have decided that some of us are meant to die.  We will need you during the hardest times that are coming.

You are needed at home.  We are helpless without our protectors.  Our nationalism is to care for our families and lands.

The bankers” motto is: “Your life is yours to give and for us to take”.

Our grandfather’s said that each boy, inside their minds, has two wolves constantly fighting each other. One black one. One white one. The grandson asks, “Which one wins, grandpa?” The grandfather says, “The one you feed”.

As Buffy Ste-Marie sang “He’s the Universal Soldier, and he really is the blame.  But his orders come from far away no more.  They come from him and you and me. Oh, brothers, can’t you see, this is not the way we put an end to war”.