MNN. 9, 2013. Ice hockey is the fastest and most exciting winter game in the world. It began in brutal northern winters. The Indigenous of Great Turtle Island were the first to play a game on the ice. The Mi’kmag of the East were seen playing this game in the 1600’s, with a curved tool on an ice surface. The first puck was a frozen apple.

Players had to move fast in the cold.

Many other Indigenous nations played a version of field hockey with a puck or ball and curved wooden stick. No padding or equipment was used by the players. The word ‘hockey’ came from a Mohawk scream of pain, “ah’kee!”, when they got hit with the ball. 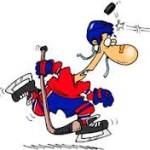 The first native hockey player in the NHL was Fred Sasakamoose for the Chicago Black Hawks. There have been many since.

Our simple game has been adopted as Canada’s most beloved national sport. It’s been adopted outside of Great Turtle Island. One of the greatest Canadian Hockey lovers was Stompin ‘ Tom Connors, whom we lost recently. He wrote a great song on “the good old hockey game”. MNN extends our greatest regards for the memories he has given us. Stompin Tom Connors