MNN. Dec. 1, 2014. Canada is the first colony to register with the Vatican/CROWN in 1867 as a corporate state. The definition of Nazism is the merger of corporation and state. All those carrying Canadian identification are the new Nazis! 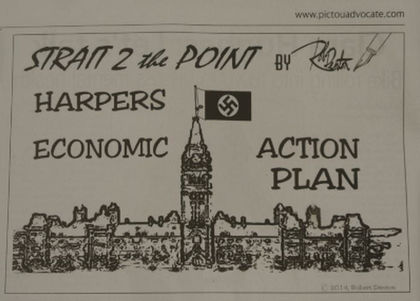 Harper is beefing up Bill C-44, the CSIS secret police act, using Hitler’s Enabling Act as the model. Harper calls it the protection of Canada from terrorists act. He will enhance surveillance powers “to more effectively investigate threats to the security of Canada” and disclosure of informants’ identities of those Canadians already on a watch list to combat radicalization.

On March 23, 1933, the newly elected members of the German Parliament (the Reichstag) passed Hitler’s Enabling Act, called the “Law for Removing the Distress of the People and the Reich”. Democracy was ended in Germany and Hitler’s dictatorship was established.

Nazis had caused ‘distress’ to create a crisis atmosphere that made the law “necessary” to restore order. The Reichstag was burnt down to cause panic and outrage, blaming his enemies. An uprising began.  Harper introduced his act just as a gunman launched a false flag in Ottawa on October 22, 2014.

During the vote, the storm troopers stood in the hallways and aisles where the voting took place, chanting, “Full powers – or else!” Hitler spoke to the Reichstag pledging to use these powers only when essential to carry out vitally necessary measures. Harper said of his Act, ”We will not overreact. But it is also time that we stop under-reacting to the great threats against us.” Hitler promised to end unemployment and promote peace. He needed a two-thirds majority to alter the German constitution. Non-Nazis supported him after he promised to restore some basic rights he had taken away by decree. 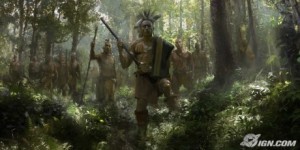 “Come into our forest, Nazis.”

One man opposed him. Otto Wells, leader of the Social Democrats. He stood up to Hitler pledging, “to solemnly protect the principles of humanity and justice, of freedom and socialism. No enabling act can give you power to destroy ideas which are eternal and indestructible.”

Hitler, enraged, screamed, “You are no longer needed! – The star of Germany will rise and yours will sink! Your death knell has sounded!”

The vote was 441 for, 84, against. The Nazis leapt to their feet clapping, stamping and shouting, then broke into the Nazi anthem. Hitler and his corporate financiers successfully tore down the German Democratic Republic legally and ended democracy, leading to a complete Nazi takeover. The Reichstag became merely a sounding board, a cheering section for Hitler’s pronouncements.

Currently the oligarchs are well advanced in their plan to control the globe through corporate “trade treaties”. President Obama is setting up panels of international corporations to override national laws and the rights and protections of workers, consumers and investors worldwide.

Those who accept the Great Peace are the new Indians and are required to help us Ongwehonwe spread the peace and protect Mother Earth, the only way to heal Nazism.

If apathy continues, we will all be singing:

Intl. oligarchs to run the world.