MNN. APR. 4, 2013. Canada is the first corporate state that the bankers want to model all other states after for the one world order. Minister of Foreign Affairs, John, Baird is used to the banker-controlled Canadian press, not to answering real questions. He confirmed that Canada is a corporation that depends on money, bribery and lies, as all corporations do. The Foreign Affairs Minister’s job is to deliver the bribe, eg., “Sign this, or vote like this, or you won’t get any money”. 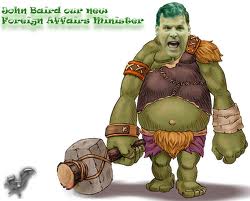 “This press conference is now closed”.

On March 31, 2013 a press conference was held in Jordan to talk about Syria and trade with Jordan. Baird said there is no tradition of coalition governments in Canada!! The Harper Conservatives with 38% run Parliament counting it as a majority. Harper’s favorite biography was about Josef Stalin, who said, “It matters not who wins the vote, only who counts it”. 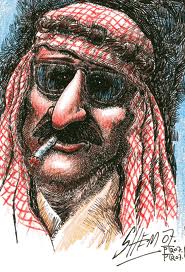 Sheik: “Canada’s not a country?”

An Efranews reporter asked about why Canada pledged to reduce greenhouse gas emissions by 3% at the Conference of the Parties in Copenhagen, while the EU agreed to 20% to 30%. The Jordan Star reporter asked about Canada being the only UN country unwilling to combat Desertification.

Baird explained Parliament is not involved in international agreements. The Prime Minister and cabinet can sign or ratify or withdraw from international instruments. They can secretly sign any international covenant, convention or treaty. Canada is not a country. It is an off-shore corporation that must generate profits for the shareholders. 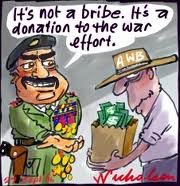 Another reporter asked about Canada’s refusal to adopt the UN Declaration on a nuclear arms free Middle East. Canada has a double standard by condoning Israel’s possession of nuclear weapons while condemning Iran. Baird said Israel was a democracy, Iran was not. Then a reporter suggested that Canada sounded more like an autocracy than a democracy. Baird mumbled incoherently and shut down the Press Conference. As the Beatles sang” “I need a fix cause I’m goin’ down.  Down to the bits that I’ve left up town. I need a fix  because ‘m goin down.”Happiness is a warm gun