MNN. 8 July 2013. On Saturday morning, July 6th, a bomb wiped out the center of the town of Lac-Megantic [Quebec] on Mohawk Territory. Over 60 of the French settlers for whom we are responsible were murdered and ‘disappeared”. 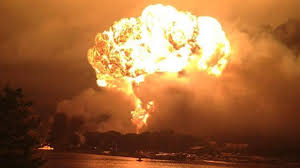 According to the Great Peace of Montreal 1701 is under the protection of the Constitution of the Council of the Great Peace. We have a duty to protect all living things. We demand a full investigation of this criminal act of the multinational corporations. Montreal, Mine & Atlantic Railway Ltd., was hauling 73 substandard tankers and locomotives carrying toxic crude to Irving Oil in Saint Johns New Brunswick for the US market. Every train that goes through our towns and villages is loaded with enough ammunition to create a “war zone”.

The train was parked in Nantes. Nobody was in the locomotive. The engineer had locked up and gone to sleep at a nearby hotel. At 11:30 the brakes of one locomotive was mysteriously released. It caught fire and billowed smoke. The fire department was called to put it out. The remaining cars were not checked. At 1:00 am. the remaining cars started moving directly downhill into the Lac-Megantic town center, about 11 kilometers away. A a social gathering was taking place. The train sped toward them, careened off the track, came to a stop near the middle of town and blew up like an atom bomb. The people and town centre were incinerated. The poisons ran into the lake. 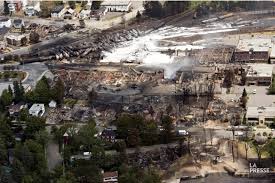 War on Mother Earth in Quebec and elsewhere!

Canada ships $73 billion in oil to the US every year, passing them through our towns and villages. Environmental regulations are constantly being removed and/or sidestepped. More shipping of crude oil is planned for the east and west coasts.

The railroad tankers used in US and Canada are old and dangerous. By deregulation they don’t have to be replaced. Even more unsafe pipelines are being planned. Someone would have a strong motive for releasing those brakes. We Indigenous people should oversee any investigation of such criminal acts on our land.

Foreign corporations normally cover their criminality by paying off all the corrupt politicians and law makers. They look for perpetrators before picking their “patsy”. The victims are forgotten. We will stop the destruction of Mother Earth caused by their toxic economy. These railroads, pipelines, roads and waterways are creating ecological destruction on our land. We are all at risk.

There must be an immediate ban on transporting all war materials across Onowaregeh/Great Turtle Island. It violates the Council of the Great Peace, the law of the land. As Jimi sang in “House Burning Down”: “Look at the sky/turn a hellfire red. Somebody’s house in burning/down, down, down, down. I say, O, baby, why’d you burn your brother’s house down?” House burning down 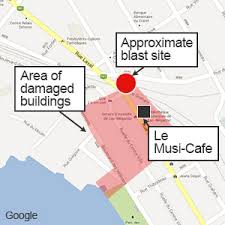 5 thoughts on “MURDER AT MEGANTIC”