MNN. Sept. 21, 2013. The goal of corporate rulers is to kill as many as possible as soon as possible to bankrupt, defeat and control nations. A few “major” multinational states control various sectors of every economy: transport, Food, Communications, Housing, Luxury, and Energy. 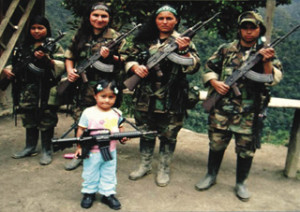 Corporate society is the consumer. Wars happen elsewhere. Dreams are created and fed to the masses. Politicians, sports and entertainment stars live out the glamorous luxurious lifestyle for them. People are made to chose between ‘nice things’ in exchange for giving up their freedom. Corporate rulers need war to avoid providing for the real needs of the people, like food and shelter. 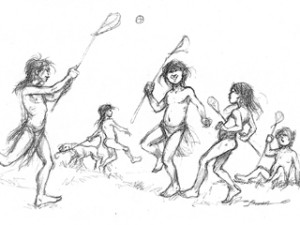 The dream world is falling apart. The “real world” is multinationals, bankrupt cities and nations, sexism, class bias, 1% controlling 99% and watching the violence on Saturday Night Hockey in Canada or Monday Night Football.

Sometime large-scale war may become too expensive. Films like “Hunger Games” show gladiator sports to the death between the have-nots for the entertainment of the elite. 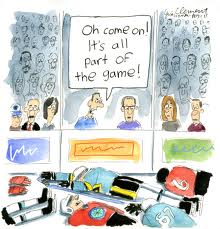 Blood sports and murder shows on prime time promote a taste for wars and violence. People constantly point guns, dead bodies everywhere, brutality against women and children and vicarious violence. We are being conditioned to fear our innate needs, which we are told are barbaric.

Millionaire elite athletic stars are groomed to create the diversion and feed society’s appetite. They may eventually be made to fight to the death, especially when the rulers’ psychological control of the masses is threatened. If the game is too mellow, the rules are changed to generate more violence. Penalties will not be called. The time limit will be removed. The game is over when everyone is dead.

As life gets harder by design, these violent games become more vital. Scoring and fighting re-directs the violence into entertainment. Today some youth are physically and mentally destroyed or injured for life in organized sports.

The elite are concerned about their highly paid stars becoming more demanding. Even they want freedom and basic human values. Those stepping out of line are “dealt with”.

Sport is war surrounded by rules and a track or field or spectator venue. Changing the game rules shows the rulers’ weakness. When the corporate rules can’t direct the violence, the game and society become infected. Rules vanish. Violence becomes careless. People destroy and kill. Fights break out in the stands and on the streets. Violence becomes futile, undirected, self-indulgent. Control breaks down. The pattern in mass shootings is similar: lone heavily armed gunman, shooting unarmed people in a public venue and then death of the gunman. Most televised! 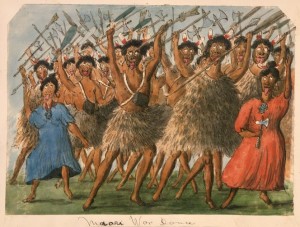 Rather dance than fight!

Natural laws don’t change. Traditionally our sports are spiritual. We are competitive. Even in so-called Indian warfare, we did not kill. Counting coup is not murder. It is riding against the enemy and touching him. Nature does not have a taste for death! Even Stompin’ Tom sang that sport is for fun: “the Stanley Cup is all filled up for the chaps who win the drink-
Now the final flick of the hockey stick and a one gigantic scream-
The puck is in!”Stompin’ Tom: “Good Ol’ Hockey Game”.