MNN. July 3, 2018. On July 4 US independence day, think about those who struggle for justice on turtle island. Remember this beating on May 18, 1997 of the onondaga by the I-81 INDIAN DETAIL of the New York State Police?

The Onondaga15 have taken this case through the entire justice system of the United States to prove there is no justice for us. We are now taking this case to The Hague. tekarontakeh will present this statement to the International Court of Justice at The Hague in the Netherlands. [No. 17-928 in the Supreme Court of the United States, Jones v. Parmley].

Sego. My name is tekarontake. I’m a kanionkehaka, that people know as Mohawks. I’m 65 years old. I was raised in the way of our old people and the way that our people have always taught us, to know who we are, what we represent, where we stand in today’s world. I am a full speaker in our language. I also learned how to speak English, which you can hear how I am addressing you today.

Over 500 years ago people came from across the ocean to our land, to our home. They had these ideas in their mind that they were a superior people, that they had the right to come and kill, rob, try to enslave us, abuse us in any way imaginable. This has been done. There have been atrocities spoken of in different parts of the world. But none compares to what has happened here in the Western Hemisphere.

Though the United States constantly states that they have conquered us, there was never a war fought to conquer us. The United States came into possession of our territories of our homeland to abuse our people. They’ve done it through deceit, spreading diseases and trying to eliminate our people, through every way imaginable.

When they became known as the United States, after the revolution and separation from Great Britain, they entered into agreements with my people. We offered them the hand of peace, we called teiohateh, which means ‘two paths’. Because they had no path on this land, that they came here by water, we showed them the courtesy that our agreement with them would be upon the water. We launched our canoe into the water symbolically to travel alongside parallel with their ship through the river of life. We will practice our way. They were newcomers, visitors. We fed them, healed them and everything that a friend would do to extend best wishes to someone.

The United States and others never appreciated the kindness that the people of the Western Hemisphere have shown. Their response was to try to eliminate us and dispossess us of our homelands.

Today they try to pass legislation. They claim that their war was over taxation without representation. They were happy that they would have a voice in their future. They, in turn. denied our people our human rights.

Twenty years ago the state of New York again wanted to illegally legislate taxation policies on our people. We again opposed it. We had an information gathering, a ceremony and a family picnic with our grandfathers and grandmothers, the parents and children and so on.

We were met with baton wielding state police, who said nothing to us but just started beating down on our peoples, arresting and charging us with ridiculous charges. The first thing the state did in their court was to drop all charges because nobody had broken a law. Yet they had beaten down on men, women and children. They did not discriminate. Twenty years ago we looked at justice and never received it. We took it all the way to the Supreme Court of the United States and received absolutely no justice.

They tried to buy their way out of it. Fifteen [out of over 100] of us refused to accept their money. This issue was never about money. We care about our children, our grand children and the faces that are yet unborn. These are the people we have a responsibility to.

We have always been a free people. We have always been sovereign as individuals. We are true sovereigns. We are not a corporation. We are not a nation. We are a people. It is our desire to continue to be a people and to live as free people, the way our ancestors had taught us. We continue this journey in our lives, to be a free people. We think of our people several generations ahead, that we would leave this place in a good way for them.

The United States has never seen things as we see them. They continue today to pollute our land, our waters, our air, our very being. They try to pollute the minds of our children with their propaganda, lies, religions and ongoing genocide.

Today we bring our words to you in The Hague. We knew we would never receive any true justice in the United States judicial system. We have taken it all the way to prove to all of our people that we would never be able to receive justice in the US system. Now we’ve come to The Hague. We hope there is a chance that you who would hear our voices, would be honest and render a verdict that would give our people justice. But if you don’t, we know why. We will never find justice in any white man’s court. With best wishes I hope that you will find in your minds a justice that would be good and right for the onkwehonweh people in the Western Hemisphere.

I thank you for your time. Onen.

JULY 4 IS THE US CELEBRATION OF WAR: Billy Joel sings “Goodnight Saigon”. We all want peace. Nature created us to resist until we win: “We met as soulmates On Parris Inland. We left as inmates From an asylum. And we were sharp, As sharp as knives. And we were so gung ho to lay down our lives. . .” 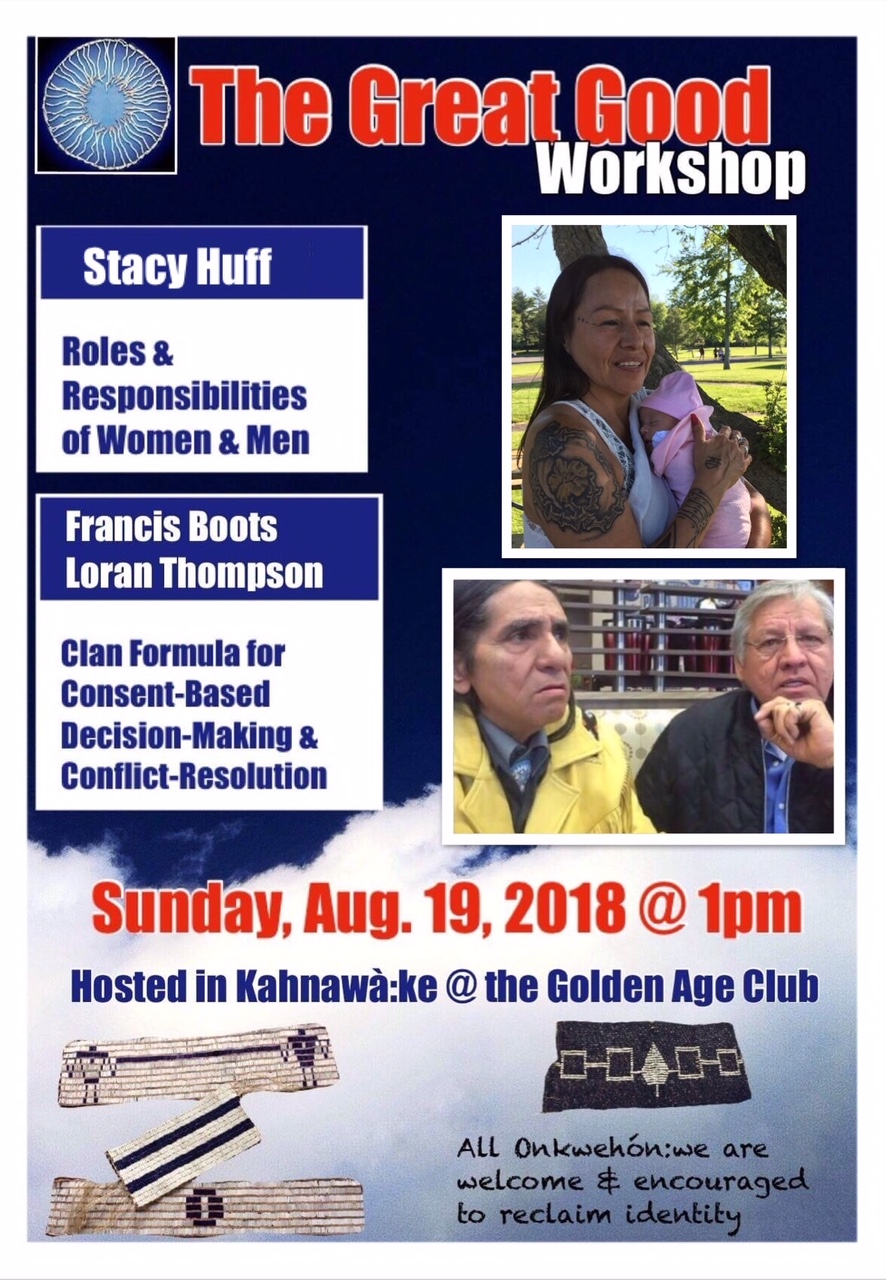 KAIANEREKOWA HAS THE TOOLS FOR RESISTANCE & DEFENCE!