MNN, Oct. 29, 2020. The human race has been prepared for a long time to accept the brutality that’s necessary for the takeover of the the financial industry worldwide. People are being bored to death and distracted with confusing oppression.  The human race could be taken out of it with the snap of a finger by somebody who can show people the truth. The blinders must be removed. 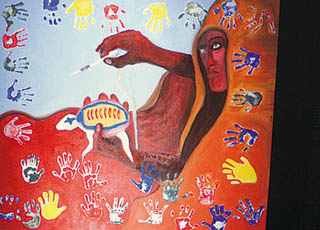 The COVID virus is being conveniently used to put everybody on house arrest to bring the new world order into  existence.

Nobody must see the concerted effort to blind the eyes of the human race so they can be taken over by a small group of very financially powerful people, who are dividing up the world and will use the people as slaves.

Prime Minister Justin Trudeau is meeting in Europe with the New World Order to create the new system. He refuses to meet with the indigenous people who are being terrorized across turtle island. See “Trudeau, EU leaders meet ahead of US election to reinforce support of world order”. https://globalnews.ca/news/7429181/trudeau-european-union-world-order-us-election/ He did not consult the president of the United States or the prime minister of England. Trudeau is locking people into their homes again during this meeting. See link to “Biden and the two world order”.

The world’s indigenous people are opting out as the great peace and two row agreement based on natural ways puts the European elites in their boat and we stay in our canoe. There is a great chasm between our cultures.

People have been put under the death delusion and made to feel vulnerable and silent. Hitler put people in a trance so he could do anything he wanted. He talked insanely. The Nazis had huge sinister looking night rallies. Wars were threatened everywhere. A few saw it and shook off the blinding blanket thrown over the world.

Some invaders see the power of the philosophy of peace and have threatened to burn down the longhouses. 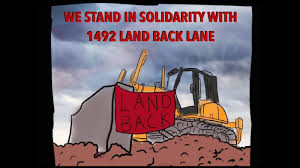 PEACE IS A THREAT TO THIS NEW WORLD ORDER. WAR AND VIOLENCE ARE THEIR STRENGTH. THE KAIANEREKOWA BRINGS PEOPLE TOGETHER, NOT TO HATE EACH OTHER .

Police are being used by governments to illegally oppress the people. Mark Miller, the Minister of Indian Affairs in Canada, a retired military commander, was sent into Six Nations to crush the resistance using military style style strategies in the Canadian army. Indian Affairs is a department of the military with a “war room” on the 14th floor. An armed camp has been set up to begin the takeover of Ontario and to stop native resistance across Canada. The new Minister of Quebec Indian Affairs is a former cop.  Attacks on indigenous people are being used as staging grounds to carry out their aggression and takeover.

In Akwesasne SQ officers are taking over native police. They can cross the Canada/US border without restraint using our border crossing rights.

US and Canada are more controlled when placed under military powers. A faction of the government want to disarm the people so they cannot defend themselves and their territories from an invasion. The UN have set up “cross policing’ between nations  because police are reluctant to shoot their own people.

One project was to kill the old people. Soldiers were ordered to go into the old peoples homes in Ontario and Quebec where elderly were in critical condition, at death’s door, already dead or dying en masse. They reported to the federal government. Nothing was done about it.

Quebec is the staging ground for the European take over of Canada and the United States. They are in the strategic position, northeastern turtle island, north of all major cities in the US and the cusp of the Great Lakes. They are connected to France that has the nuclear bomb and have a French territory in the St. Lawrence gulf, the Anti-costi Islands.

The infiltration started in 1965 prior to Montreal Expo 67. The French soldiers came over and became teachers and workers and stirred up the young people. Charles DeGaulle made the statement “vive la Quebec libre”, it was a separatist message to the French from France to start the subsequent FLQ crisis. A French bureaucrat living in Ottawa helped Pierre Trudeau with the crisis and then disappeared.

The war In Canada is the French [France] against the English, as before.  The Mohawks and indigenous are always neutral. They both vie for our support.

The US constitution was spawned by our great peace philosophy which is the basis of their republic. To take over turtle island, the indigenous people have to be annihilated, especially the clan mothers where the power of the people and the land  is vested. In the restructuring by the invaders, they intend to dissolve the true government of North America, the Iroquois Coinfederacy and all its friends and allies.

United States and Canada have no home here. They are refugees under our protection. They violated their agreements with us. Their allegiance is to the European order.  They can’t celebrate the true natural culture of the indigenous. Their justice system is the common law of England and the European civil law. They have no language, property or culture. They are “foreigners”.

They are avoiding the fact that turtle island is unceded indigenous land, from ocean to ocean and pole to pole. They are removing chiefs and clan mothers who are hereditarily caretakers and maintain jurisdiction of turtle island on behalf of the unborn babies.

On October 21 2020 the military flew over Kahnawake and Kanesatake without consent, knowledge or right. Every indigenous community is a “no fly zone” and natives have the right to defend themselves by any means. The planned fly over the following night didn’t happen. All of turtle island is unceded onkwehonweh territory under indigenous jurisdiction and is a “no fly zone”. No foreign military shall violate our air space. The military flyovers are never explained to us by the band council, military or government.

All the maps of our territories are in Indian Affairs in Quebec and Washington.

Montreal is being rebuilt to house this new regime to be ruled by the Vatican. The office buildings are empty. The Vatican wants to create money and power from nothing, like the British banking system did.

Creation reminds us of the genocide of over 100 million indigenous people. Their invading descendants are once again attacking us and our mother earth to continue the genocide.

Our inspiration and guidance comes from the universe. Creation has committed us to taking care of our mother earth and our true natural family on turtle island. No one can split up creation. Science can’t be separated from the kaianerekowa. Turtle island belongs to the unborn. No one can sell or convey her to anyone.

The great Johnny Cash has a song about these candidates: “Egg-suckin’ dog.
I’m gonna stomp your head in the ground If you don’t stay out of my hen house
You dirty old egg-suckin’ hound…”

TRUDEAU TO MEET WITH EUROPEAN NEW WORLD ORDER BE