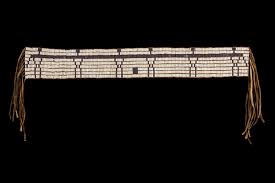 MNN. Dec. 4, 2021. The supreme original laws of turtle island are the kaianerekowa, great peace, and other original natural laws that existed since time immemorial. The kaianerekowa recognizes only the kaianerekowa. All other laws are null and void. Section 35 [1] of the Constitution Act of Canada, 1982, “recognizes and affirms”  the “original laws and peoples of Canada”. Anyone recognizing all Canadian laws violats the teiohate, two row. Staying in our canoe and staying out of their ship. 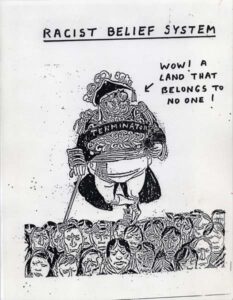 OUCH! THE COLONIAL LIE HAS BUSTED

Pre-colonial aboriginal rights existed on onowarekeh, turtle island, since time immemorial before the settler colonists arrived and illegally imposed themselves on our land. The colonial Constitution Act of Canada, 1982, was to solidify their theft of turtle island. The “existing aboriginal rights of the aboriginal peoples” are based on the kaianerekowa, the great peace, and other original laws which existed from the beginning of time, and have never nor will ever be amended, until the end of time, because they are based on nature. There has never been a surrender of land, people or anything on turtle island. Ever.

Section 35 [1] provides: “the existing [pre colonial] aboriginal and treaty rights of the aboriginal people of turtle island are hereby recognized and affirmed”.

Section 35[2] affirms the supremacy of the original people of turtle island. 95% of the survivors of the genocide are forced to live by the illegal Indian Act and all laws of the colony of Canada that go against the kaianerekowa. Section 35.(2) provides “aboriginal peoples of Canada” includes all the natural people of turtle island and the [corporate] Indian, Inuit and Metis which are created by Parliament. 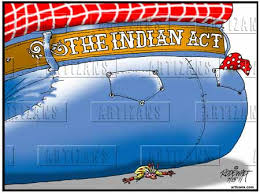 They  follow the laws of Canada [Indian Act] and are Canadians and not indigenous.

Section 52 confirms that section 35 (1) is the supreme law of the colony of Canada [but not of turtle island]. It specifically “recognizes and affirms” the kaianerekowa and indigenous laws of “the aboriginal peoples of Canada.”

Section 52 provides that the colony of Canada is subservient to the kaianerekowa and all indigenous laws. All laws of Canada which don’t acknowledge our supremacy are of no force or effect and go against the kaiainerekowa. their laws are for their subjects. we are not their subjects. 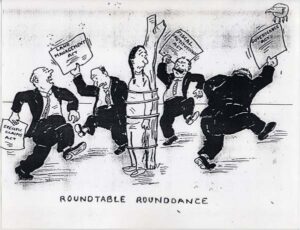 Section 52 [1] confirms that Section 35 is the supreme law of ‘Canada’. Therefore, all laws of Canada that are not recognized by the kananerekowa are of no force or effect. All Canadian laws have been genocided by the genociders. No weapons were used. Just words.

Canada shot itself in the foot. The supreme laws of turtle island including Canada, are indigenous laws. As a result Canada is “of no force or effect” and cannot exist as it violates its own law.