MNN. Jan. 22, 2015. The Gus’wen:tha, Two Row Agreement, between the Ongwe’hon:weh of Ono’ware:geh, is the basis of our arrangement for the invaders to live among us. Everything they brought in their ship stays there. They agreed not to intrude into our canoe. They cannot enforce their Admiralty law of the seas on us. The scheme of the CROWN’s Privy Council through the Mohawk Council of Kahnawake Inc. violates the only true legal agreement allowing the visitors to co-exist with us in eternal peace. They breeched this agreement. 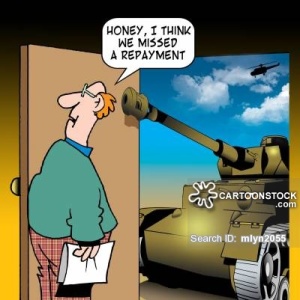 It’s Mohawk Repo. They want 500 years of back rent!

The plan for the takeover of Ono’ware:geh. Money is debt. The bank lends $1000 for a truck. Through the fractional reserve banking laws, the bank now has $10,000 available to lend to others. When the borrower for the truck is behind 3 payments, the bank issues an order to the repo man to seize the truck.

If incorporated INDIANS of MCK Inc. is successful in privatizing our property, apply the same scenario of the truck to our homes. Three months behind, in walks the repo man. Our family is out on the dirt road in the blowing freezing snow. So the bankers can hold onto Ongwehonwe land.

When the bank lends us some money to build our home or do repairs, MCK Inc. co-signs the loan because a lien cannot be put on us.

If we fall behind, the council seizes our property. With the proposed municipalization, like any other city on the Seigneury of Sault St. Louis, the bank can seize our home and land, even if we are almost finished paying for it.

New municipality rules to be illegally asserted by the incorporated INDIAN council allow the bankers to take everything, as they do everywhere else in on Onowaregeh. Illegal taxation will be enforced. Economic circumstances are deliberately created to cause us financial hardship. Most will resist the extortion. The sheriff comes in, confiscates our home, building, property and land. All based on a fake debt that is cashed in by the bank.

No lien can be put on Ongwehonwe because we own everything. The corporations of Canada and the US own nothing.

The Indian Trust Fund contains hundreds of trillions. The corporation of Canada stole and extorts it for their benefit. We have petitioned to remove these trustees. It’s not a loan or gift or welfare. It’s ours.

Meet screenwriter and movie producer, David Crowley and his wife Komel, who were found dead in their home along with their 5 year old daughter. David was working on a movie exposing the dangers of an unaccountable police state.