MNN.  Dec. 12, 2012.  The Assembly of First Nations AFN and Iroquois Caucus IC merged their corporations on December 4th 2012. The Iroquois Caucus represents the band councils on the Mohawk communities in Canada, not the legitimate Mohawk people or Iroquois Confederacy.  They take credit for our grassroots activism.  In fact they worked behind the scenes to help their benefactors, the Canadian government, to try to silence us and continue the illusion of freedom.

The AFN represents the other colonial band councils in Canada.  It appears that these two corporate branches are at the forefront of the ‘Idle No More’ movement or taking over the agenda. They are trying to give the impression that all Indians follow the Indian Act, which is a lie.

The merger is supposed to be the start of a combative relationship between the AFN and the federal government.  How? Both lobby groups are being paid by the corporation of Canada.

The Iroquois Caucus has nothing to do with resisting the colonists.  They are well paid to pacify, confuse us and make sure that the true Confederacy cannot institute the Great Law of Peace.

They have no legal right to enter into any negotiations involving our people, land and resources.   They only represent the band council corporate Indians and the voters in the reserve elections.  Grassroots peoples will not be sitting at the negotiating table when these three corporations [AFN, IC and Canada] wheel and deal away our resources and place more genocidal restrictions on us.

Prime Minister Harper is frustrated over AFN’s failure to shut us up and make us subservient.  His fascist bill C [whatever!] will create more starvation, imprisonment and death from economic, racial, cultural, spiritual genocide.  Every successful independent Indigenous business is criminalized.   Harper wants a new team of super obedient Indians.  As the Economic Hitman says, “Don’t worry about the people. Just think about you and your family”.

The 1924 Indian Advancement Act placed us under the most oppressive economic sanctions of any people on earth, to try to starve us into submission.  The reserves were and still are prisoners of war camps.  To eat we are forced into oppression.  They want to remove us to take our resource rich land for the multinational corporations and to create toxic garbage dumps.  [Attawapiskat, Keshachewan, Akwesasne, Kahnawake, Tyendinaga, etc.].

The “It’s-No-Use” AFN met recently in the Gatineau to tell us how bad and hopeless everything is and practically told us we had to keep on living with it.

The delegates crossed the Ottawa River to march on Parliament Hill and tried to enter the House of Commons.  The scuffle was over in an instant.  The government knew it was their puppets and could slam the door in their faces.  According to the Indian Act the Indians are not allowed to go in. 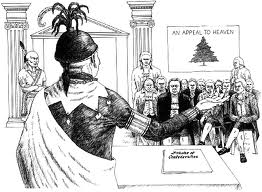 The true ongwehonweh of Great Turtle Island will not beg for what is ours. The visitors will be reminded of their illegal occupation of our land, theft of our possessions, the genocide and what they owe us.

Why are our people fighting for treaties?  These illegal contracts are not worth the paper they are written on.  We don’t get anything.  They got the right to control us and take everything from us.  Every treaty has been broken, which makes them null and void.

The only true treaty is the Guswentha in 1701 giving them refuge and to become of one mind with us.  They could never have any jurisdiction over us, our land, resources, air and water.  International law provides that when a treaty is broken everything reverts to one day before the treaty, June 24 1701.

The occupiers issue corporate band cards.  The holders are deemed to be Canadian Indians under Canada’s corporate sovereignty and jurisdiction.

If band cards were torn up tomorrow and Canadian corporations were renounced, only band council chiefs and those who vote in their elections would remain as their artificial corporate Indians.  The rest of us would be in the driver’s seat, not being part of the foreign corporations and having never given up anything.

Canada loses $60 million a day, $22 billion a year, because of the discount prices they get for selling our oil to the US.  They want to sell it to Asian markets via the West coast.  We will never allow the pipeline to go through ongwehoneh land.    We closed down the Northern Gateway pipeline project.  In the 1970s we shut down the Mackenzie Valley pipeline.  Scumbags Enbridge was shut down.  The thieves don’t want to be honest with their landlords.  Instead they send their fake cops [police officers] to threaten us.

The settlers came here with nothing, no common language, people or history.  They brought greed and a thirst for blood.  They are panicking, angry, frustrated and threatening us because they never thought they would be accountable.  It is time to dissolve the squatting illegal corporation of Canada.  Yes, we will tell foreign governments, corporations and their entities what they may or may not have.

We must work together as one inherent people of Great Turtle Island. There is a formula to come to a consensus so that we all survive.  If one goes hungry, we all go hungry.  Pushing for control of the interest on our resources is a start. 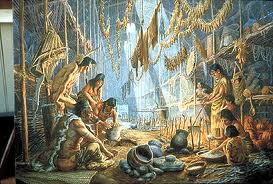 We want peace, not pacifism.  We want control of our lives, our land, minerals, oil, water, gas, soil, eco-system, air and everything on it.