MNN. Aug. 27, 2015. There was no wall to wall coverage of over 150 million ongwehonweh babies, children, youth, women, men and elders being murdered, hacked, burned or worked to death, starved, even eaten, raped and tortured. The CROWN did this to us. The settlers were all in on it. Vester Flanagan is getting his 15 minutes of fame for murdering those two tv employees on camera. 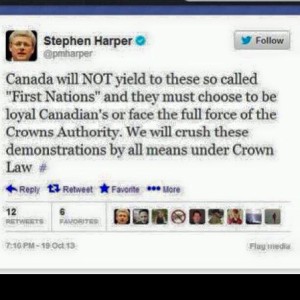 We are reminded through their constant military displays, that the Western Roman Empire is the republic of war that commits genocide on a daily basis with no remorse. Vesper Flanagan learned from them. We ongwe’hon:weh are seen as less than human beings and deliberately forgotten so they can continue to benefit from the genocide they are still committing. The scalp laws have never been repealed. Like all their corporate bylaws, they are brought up when they are needed, i.e. Toronto G20 Summit in 2010. Vesper Flanagan saw his victims as less than human. It was just like the Norridgewoc, Wounded Knee, Sand Creek and thousands of other massacres carried out on our people. The military told them, “Take whatever land you want and kill the INDIANS on it”. Their policy continues. 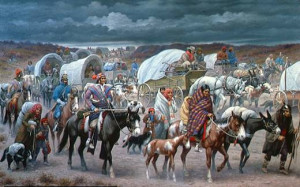 No tears for us.

The blacks were released from slavery so they could form regiments called Buffalo Soldiers for the sole purpose of killing the INDIANS. Genocide is how they and their masters got everything they have. The people of the world will finally put an end to genocide when we deal with this issue on ono’ware”geh, Great Turtle Island.

The CROWN’S business plan rewrites history to cover their crime, so they can get away with genocide. The CROWN [Western Roman Empire] seek to commit genocide whenever they need to, but nobody else can. In Canada the Truth and Reconciliation Commission gathered evidence of the CROWN’S absolute guilt for committing “genocide” of our children. 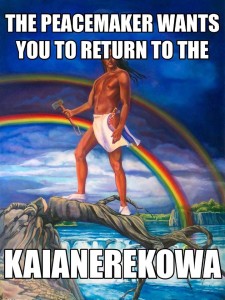 Mainstream media is the ministry of propaganda. Their main job is to promote fear and anger throughout the population as directed by the corporate matrix we are all subjected to. Their secondary job is to rewrite history to cover the genocide committed on ono’ware:geh by the Western Roman Empire. They got away with it so far by never mentioning it in the media.

Vesper Flanagan worked in the news so long that he decided to become the news. Frank Zappa’s lyrics capture this story perfectly, which we post in its entirety. [More Trouble Every Day]

Well I’m about to get up sick
From watchin’ my TV
Been checkin’ out the news
Until my eyeballs fail to see
I mean to say that every day
Is just another rotten mess
And when it’s gonna change, my friend
Is anybody’s guess

Wednesday I watched the riot. ..
Seen the cops out on the street
Watched ’em throwin’ rocks and stuff
And chokin’ in the heat
Listened to reports
About the whisky passin’ ’round
Seen the smoke and fire
And the market burnin’ down
Watched while everybody
On his street would take a turn
To stomp and smash and bash and crash
And slash and bust and burn

Well, you can cool it,
You can heat it. ..
‘Cause, baby, I don’t need it. ..
Take your tv tube and eat it
‘n all that phony stuff on sports
‘n all the unconfirmed reports
You know I watched that rotten box
Until my head begin to hurt
From checkin’ out the way
The newsman say they get the dirt
Before the guys on channel so-and-so

And further they assert
That any show they’ll interrupt
To bring you news if it comes up
They say that if the place blows up
They will be the first to tell,
Because the boys they got downtown
Are workin’ hard and doin’ swell,
And if anybody gets the news
Before it hits the street,
They say that no one blabs it faster
Their coverage can’t be beat

Hey, you know something people?
I’m not black
But there’s a whole lots a times
I wish I could say I’m not white

Well, I seen the fires burnin’
And the local people turnin’
On the merchants and the shops
Who used to sell their brooms and mops
And every other household item
Watched the mob just turn and bite ’em
And they say it served ’em right
Because a few of them are white,
And it’s the same across the nation
Black and white discrimination
Yellin’ “You can’t understand me!”
‘n all that other jazz they hand me
In the papers and tv and
All that mass stupidity
That seems to grow more every day
Each time you hear some nitwit say
He wants to go and do you in
Because the color of your skin
Just don’t appeal to him
(No matter if it’s black or white)
Because he’s out for blood tonight