MNN. Mar. 2, 2013. US Senator Lindsay Graham admitted that 4,756 people were killed by armed unmanned US drones. Currently aimed at people in the Middle East, he said, “Sometimes you hit innocent civilians”. Collateral damage! Obama’s policy of assassinating Americans and designated “terrorists” abroad, without trial or due process, has historic roots. The US has a long history of passing laws to commit “legitimate” murders. Millions of Indigenous were officially murdered to steal Great Turtle Island and our resources. 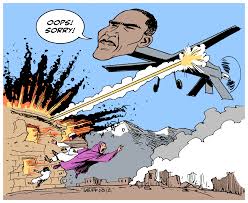 The custom in Europe was to behead enemies. The Europeans passed laws here to pay bounty hunters to kill, behead and scalp ‘Indian’ men, women and children. 125 million Indigenous were murdered in the Western Hemisphere. The victims were innocent. No crime was required. Just being of the Indigenous “race”! Cash or Indian head coins paid for our heads. Today’s US 5 cent piece with the Indian head was designed to honor this program. First it was just the heads. The volume of murders made the load too heavy. Then scalps were accepted to make sure the killings continued. 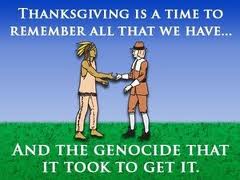 We were falsely stereotyped as blood-thirsty savages. Settlers thought it was right to kill our families and drive them from their ancestral homes and steal their lands. Payment for Indian heads and scalps created wealthy entrepreneurs and families who are the ruling elite in US and Canada today.

Governor Kieft of New Netherlands made the first payment for Indian scalps in the 1660s. By 1702 Massachusetts offered $6 for each Indian scalp. In 1756 Governor Morris of Pennsylvania offered “130 Pieces of Eight [type of coin] for the Scalp of Every Male Indian Enemy, above the Age of Twelve Years”, and “50 … for the Scalp of Every Indian Woman”. Today’s genocide is disguised as Bill C-45 and other Admiralty statute laws to eliminate us “legally”.

Massachusetts increased its payments to 40 pounds for a male, 20 for females and children under 12 years old. It was difficult to tell a man’s scalp from a woman’s, or an adult’s from a child’s – or that of an enemy from a peaceful Indian. Bounties lead to widespread violence against any Indigenous person, male or female, young or old.

Canada has branded Mohawks as “terrorists” and “insurgents” in their military training manual. We are a peaceful people with no history of attacking the US or Canada. Targeting us is premeditated stone cold murder. Obama thinks that drone strikes to kill citizens abroad is not quite murder as the push button is thousands of miles away. Push button murder is murder. As Jethro Tull sang: War Child, dance the days and nights away. Open your windows. I’ll walk through your doors. Let me live in your country. Let me sleep by your shores.”

[From information in Unlearning “Indian” Stereotypes – Council on Interracial Books for Children – and other sources. Philip Martin is a folklorist and book editor for Rethinking Schools. Rethinking schools