MNN.  Feb. 3, 2013.  The power is the People.  They select the chiefs, clan mothers, titles and positions, who answer to the people. If they don’t listen, the people will remove errant chiefs or clan mothers.

The fire symbolizes the people coming together. “Sa’tsi”ra” means, “You have a fire”.  “Swa’tsi:rare” means, “the fire is inside you”. It is the spirit, life of the person, family, clan, community, nation, confederacy. 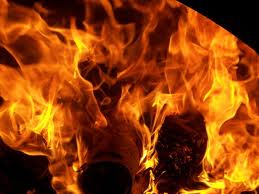 People’s Fire is most powerful.

The root word for family, “kawa’tsi:re”, is “otsire”, the word for fire.  It means the family still has a fire and exists. Each person, family and clan has a fire. The People’s Fire is the most powerful because all the minds come together.

The fire is the people’s voice. Each person has a voice, a duty to express their views on all social, political and economic issues. Individuals must exercise their personal power on behalf of the people. This is the foundation of the consensual decision making process of the Kaianereh’ko:wa, the law of the land. 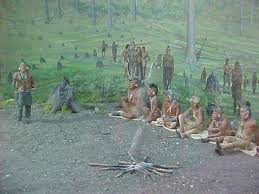 People make sure protocol is followed by all the People.

All direction comes from the fire of the People. Then it goes to the clan mothers and then to the chiefs.  We all keep an eye on the chiefs and clan mothers to make sure they are all following the law.

The Kanianereh’ko:wa, the Great Law, came to our people because dictators had risen, taken control and created constant warfare. The Great Law got rid of the dictators and the wars. We lived in peace for thousands of years, until the Europeans brought the war back to Great Turtle Island.

Band and Tribal councils are corporate Indians who are part of the royal economist bankers genocide program. They work under the direction of Indian Affairs and the US Bureau of Indian Affairs. Without any legal right, they sign surrenders of our land and resources. Our land cannot be sold or given away. They cannot use our titles to legitimize themselves and mislead the people. They don’t rule us.

Our traditional chiefs are the spokespersons for the People, saying only what the people tell them. Those chiefs who don’t listen to the People are outside the circle. Their antlers break off, the blood goes into their eyes, ears and mouth. The people cannot listen to those whose words are not clear, whose eyesight is gone and who have become deaf.

Our great law of peace is the law of the land. We have a Two Row relationship with the settlers that they have breached. This needs to be redressed. 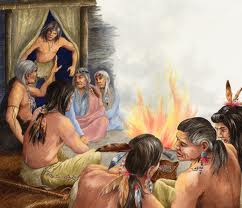 Meeting until sunset, followed by feast and dancing.

Our fire continues.  Our voices are becoming stronger every day. Each person has a duty to counsel themselves and learn as much as they can about their issues. As long as we are alive, our fire will not go out.  When the colonists tried to extinguish us, we continued our fire. We did everything to stay alive. Only we can extinguish our fire.

As Jimi sang in “Fire”: “You tried to give me your money, you better save it, babe.  Save it for your rainy day. I have only one burnin’ desire. Let me stand next to your fire.”