MNN. Aug. 12, 2015. If you don’t want to play their tug of war game, just drop the rope. They’ll still keep playing. But no one will be on the rope. The matrix is designed to keep everybody playing this game.

Joke Norton: “Wish I could help. See ya later!”

Joke Norton of Kahnawake plays this game by getting us on each end pulling and tugging, dividing our community. This monetization and class system allows the 1% to control the 99%.

To confuse us, the well programmed incorporated chiefs talk about us and the history of our struggle like a salesman and a politician, “It’s not us that’s illegal. It’s them”. Then they proceed with their plans for our assimilation and legalization of genocide. They tell us how it’s going to be good for all of us. Joke Norton wants to be just like his mentors that he looks up to, like Donald Trump. 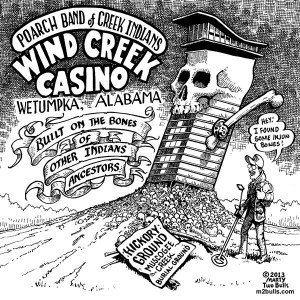 So it’s over our burial ground!

In the Kahnawake Highway 30 dispute, Joe has two sides playing tug of war, us and the town of Chateauguay. In the meantime, he plans to personally develop a shopping mall, in partnership with a number of outside developers. Joe is privatizing Kahnawake, using our sovereignty and funds to enrich himself and his partners. He wants a Joke Norton Shopping Mall of Kahnawake, a Joke Norton Tower, streets named after him, with all the whistles and commercials. The Joke Norton casino floating off the shore of Joke Norton Mall, just like Donald Trump, his mentor. A shuttle will take customers to the casino, where he will smile and collect the money, all of which will go into his pocket and then into his off-shore accounts.

Joke Norton: “Just think. You can get a job dancing at the casino”!

Joe Norton has already left Kahnawake and kaianerehkowa in his own mind. All of his tug of war, divide and conquer stragegies will fail when the people stop playing the game and let go of the rope. Joke Norton wants to swim with the big fish in the Admiralty waters. Joe, they’re gonna eat you up and shit you out!

Lets end this whole tug of war strategy by dropping the rope. 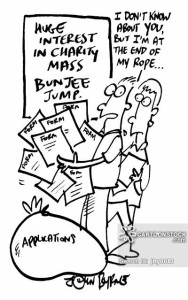 Yes, Joe, all criminals are gonna get it.

As Frank Zappa brilliantly reminds us of the tug of war strategy imposed upon us through the media: “So I’m watchin and I’m waitin, hoping for the best! Even think I’ll go to prayin everytime I hear them saying there’s no way to delay that trouble coming every day”. Drop the rope, people!