MNN. Nov. 6, 2014. The timeline shows no surrender, treaty or permission by Mohawks to turn Kahnawake into a reserve. Under the military Corporation of Canada Kahnawake is a “Prisoner of War” Camp without walls for the Mohawks. It was created on October 25, 1924. The Mohawk Council of Kahnawake is governed under the Indian Act, which is the original 100-year plan to get rid of the “Indian problem in Canada” [Duncan Campbell Scott]. The POW camp is run by Indian Affairs and its corporate entity known as MCK. The corporation is firmly directed by their military war room at Indian Affairs in Ottawa/Hull on the 14th floor. Canada and the POW Camps are financed by our stolen Indian Trust Funds. The military’s main job is to protect the stolen treasury.

Apache Geronimo on way to his POW camp.

“Ordo ab chao” is the strategy used by secret societies that are controlling the power structures, to keep the people’s minds divided [51%]. After enough confusion and chaos the people will demand a government solution to the problem created by the government using their own procedures in their jurisdiction. 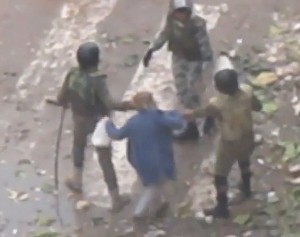 Indian Affairs’ job is to keep the Indians corralled economically and socially in our POW camps, while they enjoy the vast abundance of our land. All western European countries under Vatican rule are a party to the biggest holocaust in all humanity.

Kahnawake is one of the most in-your-face territories in the world. It is next to Montreal, one of the largest metropolises in Canada. The puppet masters have always wanted us out of the way because of location, location, location. Also, they want to totally assimilate us to get rid of the land issues, by taking away our teachings, languages, culture, so we are no longer Ongwehonwe. They shall use fear as their ally and anger as their friend when dividing the people’s minds. 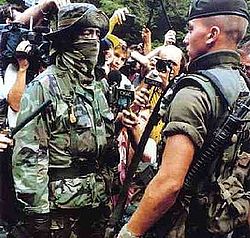 In 1990 when we objected to the expansion of a golf course, we were invaded by the Canadian army, and placed in CFB Farnham army base after our arrest. In 2008 MNN editor, Kahentinetha, was arrested and assaulted by military commandos at the border crossing to the US. In the subsequent court case, the judge ruled he could not deal with the issue because she lives in Kahnawake and is not a resident of Canada.

We have been under martial law since 1924 while they rape and pillage all of our vast lands around us. We have always been here at the fork of the rivers that come from all directions on Great Turtle Island and meet here. The Mohawk community of Kahnawake is part of the larger soveregn Kanionkehaka territory of 20 million acres.

As Frank Zappa reminds us in his epic song “Flakes”: “We just call on the phone and call up some flakes. They rush on over and wreck it some more. And we’re so dumb they’re lining up at our door.” Frank Zappa. “Flakes”.

Kahnawake was not surrendered, there is no treaty and no permission to set up reserve. http://clss.nrcan.gc.ca/data-donnees/publications/indlanhisque-hisfonterindque/kahnawake_ang.pdf