MNN. Dec. 8, 2014. The Mohawks called the Jesuits “Ratisti’hen’sta:tsi, which means “burnt to a crisp”. The people carry out the punishment for three capital offences, treason, espionage and conspiracy, by burning the criminal[s] at the stake. These crimes could lead to the annihilation of a people. The Jesuits were found guilty of espionage and conspiracy, not treason because they were not of our people. The Iroquois were the obstacle to their expansion of their enterprise. 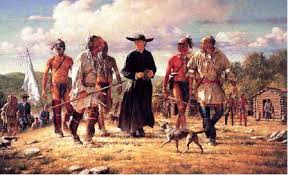 “You can go back to France or stay with us here forever!”

Brebeuf, Lalement and other Jesuits’ job was to draw maps for the military and to mislead and pacify our people. Our women and children were murdered at our most vulnerable, in our homes, while our men were away.

In 1649 the Rotino’shonni arrested them, put them on trial and found them guilty. Some confessed. They were asked for their preferred method of execution. The Rotino’shonni Iroquois way is one blow to the head with a war club causing instant death. They chose burning at the stake, which was popular in Europe for becoming a martyr. Witnesses were astonished to see that while they were burning they climaxed several times!

The corporate Mohawk Council of Kahnawake have to be  charged with espionage and conspiracy but not treason because, as they have alienated themselves, they are Canadians. They sit at the table of our enemies to get their instructions on how to give us a few dollars for our land and move us far away from our birthright and homeland. They pretend to negotiate with us when they have already made the illegal deal.

Treason is the ultimate crime anywhere in the world. Edward Snowdon can be charged with treason because he is an American citizen who worked for the CIA. Julian Assange of Wikileaks cannot as he is not a citizen of the US. They can both be charged with conspiracy and espionage for leaking top secret documents. But they both had a duty to expose the abuse of power to protect the people, nation and world.

No choice. We have to defend our birthright and the coming Ongwehonwe.