Today, May 17, 2021, the Mayor Valerie Plante, City of Montreal, and the Bronfman Family and their illegal businesses tried to unlawfully remove our allied family, the Inuit, from unceded Mohawk land at Cabot Square in Montreal. Now the forced removal date has been set for late June 2021. You and your co-conspirators, never went through proper great peace protocols to use or reside on our unceded land of turtle island. Your actions have never been sanctioned by any of the onkwehonweh nations on turtle island, from ocean to ocean, pole to pole. In Canada, you are known as the ‘cana’jon, the “squatters” and are trespassing on tiani tiotiakon Mohawk land. All your infrastructure belongs to the kanienkehaka Mohawks. You must remove yourselves immediately from our property.

The big scandal is that this project was premised upon providing low income housing for those in need. Instead they evicted the poor homeless to an empty field called “The Plateau”. People gave them tents and food. They slept on the ground in the freezing weather. Meanwhile Bronflman and his developers decided to create a Dubai of Canada playland for the filthy rich. Zoning was changed. The Inuit are asking the public for socks and shoes because they have no housing and have to walk the streets all day long.

Cabot Square where the Childlren’s Hospital was built, on traditional Mohawk land, was torn down to build social housing. Instead Mohawk land was illegallly transferred to highrise developers, mostly nonresident international investors. Meanwhile the Inuit are about to be genocided without any consideration for their fundamental human rights. [housing, social services, schools, health, welfare, education, cultural centers and economic well-being]. They were displaced and relocated by the James Bay Project, the DEW Distant Early Warning and other acts by Canada to falsely claim sovereignty over indigenous land North of 60 without any consideration for the wellbeing of the Inuit.  Over 50% of them died and the rest were culturally genocided because of it.

You, Ms. Plante and M. Bronfman,  must explain why you are circumventing the great peace. Only the real natural people can decide all activities on turtle island. The puppets of the invaders, the band council, are fellow ‘cana’jon [squatters].

Our jurisdiction starts from the beginning of time immemorial. The women are the “progenitors” of the soil of turtle island, according to the great peace, kaianerekowa, and the two row teiohateh. The kasatstenera kowa sa oiera, the great natural power [creation] placed the natural people on turtle island as caretakers.

Each indigenous is sovereign . “tewatate’wennio”. We are each part of turtle island. Our duty is to care for our mother earth. Corporations are a non-sovereign entity, not persons, which is meant to shield government elected and unelected “leaders” from any accountability to the original sovereign people of the land. 51% majority rules and 49% have no voice is not a democracy.

According to the great peace and two row, onowarekeh turtle island cannot be conveyed, sold or transferred to anyone. It will always belong to the future unborn children and all life natural to turtle island.

In our first Notice of Eviction, we kohntiokwennio demanded that you, Mayor Valerie Plante and the Bronfman Family and your associates, provide us the kanienkehaka Mohawks, ‘the keepers of the eastern door’ of turtle island valid proof based on the great peace and two row of your claim to our land. By your default in not responding to this request, your immediate eviction must happen forthwith.

This notice of jurisdiction applies to all projects by any immigrants from anywhere. Anything they do to our land, water and air without our knowledge and consent is criminal and void.

Everything over, upon and below turtle island, the Western Hemisphere, continues to remain with the original people. The British Crown cannot legally convey our property to anyone as the Crown never got a proper conveyance from any sovereign indigenous person as this is impossible pursuant to the great peace and two row.

There will be no eviction of our Inuit family by the canadien [squatters]. The squatters must be evicted according to the great peace and two row. They were given an opportunity to respond to our original Notice of Eviction. They did not respond in anyway. By default they have conceded that they must be evicted.  The eviction will be immediate and final!

We order that you must stop all work on the super structures as they now belong to us and not to interfere with us. The kanienkehaka Mohawks shall stand with the Inuit  as we are one people. No municipal, provincial or federal  government has any jurisdiction over turtle island and has no authority to make any decision about turtle island. Only we the caretakers placed here by creation have jurisdiction over each and every part of turtle island.

The Inuit have every right to utilize Cabot Square Mohawk land.  Inuit are being portrayed as creating their own problems, [blame the victim] which is not the case. Their displacements have brought them to Montreal and every level of colonial government has abdicated its responsibility to act according to our human and ancestral rights.

The disrespect shown by the City of Montreal and the Bronfmans and all the developers to the sovereign onkwehonweh proves that you know that there is no dispute that the land is ours,. You are trespassers and you must leave immediately.

Govern yourselves accordingly. Justice for the Inuit on kanienkehaka/Mohawk ancestral land.

ILLEGAL LUXURY CONDOS ON MOHAWK LAND. https://www.cbc.ca/news/canada/montreal/mtl-childrens-hospital-social-housing-1.6013118
The developers https://devimco.com/nous-joindre/  http://hrmconstruction.ca/contact-us.html
MOHAWKS DID NOT GIVE PERMISSION FOR THIS DEVELOPMENT https://www.mtlblog.com/en-ca/money/google-plans-to-open-a-new-facility-near-montreal-with-dozens-of-jobs 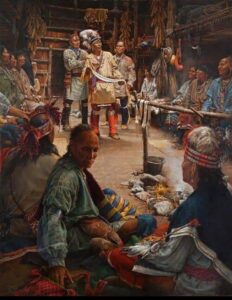 Govern yourselves accordingly. Contact me, the undersigned, at kahentinetha2@protonmail.com.