MNN. Mar. 20, 2014. Watch Quebec’s ‘pure laine’ leader Jacques Parizeau ruminate on the “final solution to the Mohawk problem”. Parizeau, is from the corporate version of the oligarchical matrix. He thinks Mohawks should be done away with! Parizeau’s final solution!

The FLQ Crisis of 1970 was a continuation of the bankers’ assault on us in 1609 through their agent Champlain. 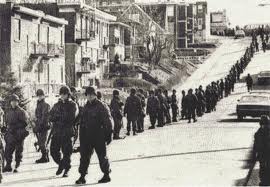 The Jesuit trained Pierre Trudeau, his buddies Jean Marchand, Gerard Pelletier, Rene Levesque, advisors from Europe and other politicians were key players. The Canadian military, the compliant media and populace were put in place.

Marchand, Trudeau & Pelletier: “Oui! Phase 2. We have to move this operation from Quebec to Ottawa!”

The Mohawks were advised to stay out of it. We are their greatest fear and they wanted to get rid of us. We used the “honey trap” to get intelligence from them.

In the 1960s young French-speaking Europeans started arriving in Quebec, posing as teachers, army vets, skilled labor and other professionals. They socialized with young Quebecois who were getting ready for the Worlds Fair called “Expo 1967”. Fascist radicalization began, setting the stage for the 1970 false flag.

Since 1963 the separatists, called the FLQ [Front de Liberation du Quebec] were involved in over 200 bombings in Quebec, demanding independence and sovereignty.

In the early 1960’s Trudeau and his crew stirred up Quebecois and then left and moved onto the Ottawa stage. 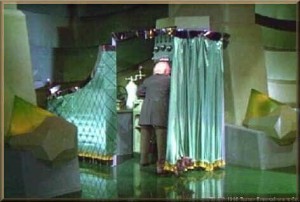 Mr. Trudeau, hey, isn’t that a guy standing behind the curtains, pulling the strings?

In 1970 the British Trade Commissioner was kidnapped, they demanded release of 23 “political” prisoners and for their manifesto to be read on the CBC. The Quebec Minister of Labor was kidnapped and accidentally killed.

Trudeau invoked the War Measures Act and declared martial law. The army took to the streets. Huge public meetings were held to rouse up the FLQ supporters. Even Charles de Gaulle made a guest appearance, shouting, “Viva, Quebec livre!”

Over 400 people were selected and arrested, most without charge or warrants. Outspoken opponents were imprisoned with no right to see a lawyer and kept behind bars for 21 days or more. 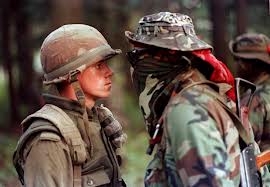 Warrior: “Can you say that in Mohawk?”

Today the two candidates for leadership, Pauline Marois and Pierre Karl Peladeau, are from the same oligarhical “poulet” camp. Maximum chaos [ordo ab chao] is being created between French, English and immigrants using old divide and conquer tactics. No English will be spoken or Muslim headscarves worn at work, faschists are already in key government positions. Peladeau is a multi-billionaire from selling Indigenous newsprint worldwide. He wants to make the rules because he has the most ill gotten gains! It will be illegal for anyone but them to make money, especially the Mohawks.

As Jimi Hendrix said: “I’m gonna spin and spread around peace of mind and a whole lot of love to you and you. Would you like to come along?” Jimi Hendrix. “Hey Baby”.