MNN. Feb. 17, 2013. When the European military came to Great Turtle Island, they met Indigenous warriors who did not meet them head on. They attacked and disappeared into the woods. Our men used swarming to attack and defeat the much larger and better armed British and French formations. Behind our fighting groups we had a democratic organization. There were natural loyalties among us that glued us together. It was defensive. The colonists ended up having to deal with us as equals.

Idle No More utilizes this strategy. Hierarchical governments cannot deal with this. They will break down. Soon Canada has to deal with the Indigenous people’s natural government formations.

Hierarchy is becoming powerless. The internet is changing the way people get information and communicate. It empowers smaller units. From the large to the few, to the small and the many! It is breaking the spell of corporate hegemony and capitalism over society.

Hierarchy works at controlling people. The Idle No More movement shows there is no way to control grassroots Indigenous people. Power is being devolved into small units, which are interconnected. Global conflicts are being reshaped. The existing order will be overturned because the power is in the people.

Swarmers know hierarchical power is artificial and against the natural way. Hierarchies need a target. There is none. One minute they are there and then they just disappear. Hitting back at nothing is not winning. We the people have power and are using it. We can be visible or invisible. Internet spreads information more effectively than mass media. New thoughts are being spread to the public independent of mass media, which has lost its brainwashing power. We can listen to anyone we chose. Swarmers can be unorganized or well organized. They are everywhere. 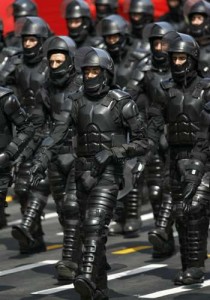 To combat swarming, like the “Idle No More” sudden formations in shopping malls and elsewhere, the US military is developing “BattleSwarm”. The military is broken down into small units. Pods operate in clusters. It won’t work because they are not based on natural affiliations.

Thinking for ourselves is a human survival spirit. Swarming reflects the human instinct to make connections. It demonstrates the social will in each of us to think and act for ourselves and to help our people. We work together, use our minds to help and defend ourselves from abusers. There is no mastermind. It strikes from all directions and then withdraws. The interconnection is on a subconscious level. They move from place to place, do something and disappear into the night. It is as though one mind is in control.

Corporate Canada has seen that their band and tribal council apparatus is totally ineffective in controlling us. We urge the councils, don’t coddle up to the powers that are out to kill us. Don’t stand in front of the enemy and ask for anything. We warn you, don’t put on the fascist uniforms and help the colonizers eliminate our people to save yourselves. Just get into their boat and be on your way. 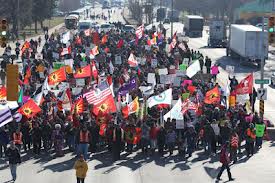 One People. One Fire.