MNN. Mar. 16, 2016. This relevant article was written in 2006 before any of the disclosure documents were presented to us. Distribution of the story at the time was limited. Pictures have been currently added. 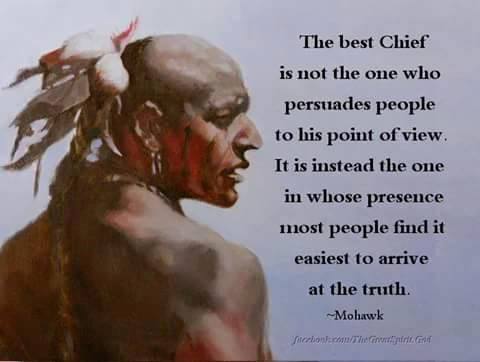 “Nine years ago we went to Onondaga to celebrate a victory against New York State who wanted to illegally tax us in violation of the U.S. Constitution. Around noon, on May 18, 1997, when we started to burn tobacco on Andrew Jones property right along Interstate 81, the “Indian Detail” Division of the New York State Troopers came along the highway. They were dressed in full riot gear and bearing riot batons. A videotape made at the time reveals some troopers joking about their “sticks” and how every trooper has “gotta have a stick”. One trooper said that the Indians needed “to get their asses kicked”. They had removed their name tags even though the State Police Manual requires them to be worn at all times.

“The Troopers used the “skirmish line” formation by facing the protesters who were 70 feet off the highway and then surrounded us. They were lead by Ollie Gibson who was wearing a ribbon shirt and pointing out people to them. Does this mean that the Troopers don’t know one Indian from another or who was a man or who was a woman or a child? We all had dark skin and dark hair. 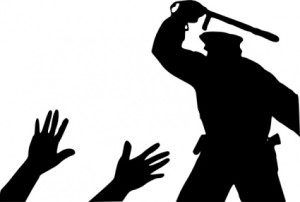 “They walked towards us smacking their batons on their palms. They charged into the people and began arresting protesters, beating us with batons, dragging us by our hair and kicking us. They threw one man, who was praying, to the ground and chocked him. They manhandled an eleven-year old girl and an elderly medicine woman and even tossed a baby in a double leg cast from his stroller. Not a nice bunch of people!

“There was no order and no warning to us. The Troopers tried to stop people from taking pictures and video taping what was going on by putting their hands over the lenses and threatening to arrest the cameramen. They even beat up some of them. A videotape is available of the news clippings which appeared over and over again on local television in Syracuse .

“26 people were arrested and charged. All charges were dismissed. One woman was accused of not moving out of the way when told to do so. She had fainted. They had to use smelling salts to revive her and then arrest her. The Troopers brought charges against one man for “running back and forth in a provocative manner”. He was acquitted. This man had arrived late, looked around at the melee, in shock and got the h–l kicked out of him.

“The father of the property owner, Ron Jones, was murdered in his home soon after. His hands were cut off and his house in Onondaga was torched. This is still an unsolved murder. We continue to put our messages about New York States complicity with certain Indian individuals, the murders and other crimes on the billboard right next to Route 81 for all the world to see. This is one of the ways we can tell the public about our issues.

“We brought charges against them in the US District Court for the Northern District of New York for violating our freedom of speech, religion and assembly, using excessive force, conspiring to violate our rights, our right to equal protection, while being indifferent to our medical needs. We did not want this to happen again to our people. The Troopers claimed that they had “qualified immunity” that “shields police officers acting in their official capacity from suits for damage…” They said they made an “honest mistake”. Is this like being “killed by friendly fire”? Are they saying, “I just forgot! Sorry for beating you up and killing you. I didn’t mean to let you make me get so mad at you”. 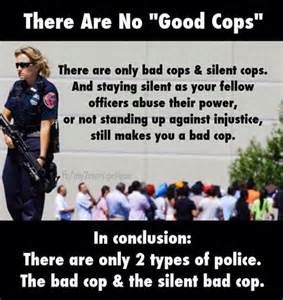 “They lost at the first level. The Troopers took this decision to the US Court of Appeals for the Second Circuit. On October 4th 2006 they lost again. Does this mean that the Troopers are going to be the fall guys for New York State and whoever requested and ordered this attack? [See case posted on www.mohawknationnews.com].

“The troopers want to get out of all this by declaring they had “qualified immunity” that they think will let them off the hook. This last decision makes it hard for NY State. So now we can look forward to a 6 to 8 month trial in Syracuse .

“These are the issues. We were demonstrating on private property and the Troopers dispersed our meeting. The Troopers had just come from the Seneca protest on the New York State Thruway. There is evidence that the Troopers were partially motivated by what had happened elsewhere.

“When the Troopers came in, it was tantamount to going into a church, chasing people out and desecrating their institution during a “religious” gathering. We asked for an injunction to stop the cops from attacking us again. There is a film showing the viciousness of the attack.

“It was also found that the Troopers had pre-planned this attack. The protesters had gone to the Jones property 10 days before. The people had started a ceremonial fire and then invited other members of the Six Nations to join them on May 18th 1997 for a ceremonial gathering. About 100 people came. We handed out pamphlets on 81 as the cars slowed down to see what was going on. Then we backed off.

“This is an important case because we need to curb the power of the police to make up scenarios so they can carry out their “Indian Detail” agenda. They said they believed that there would be guns there. In other words, they took the law into their own hands. Obviously the court did not believe them. On May 17th, the day before, calls went out. State Troopers were told to meet at the K Mart parking lot in Nedrow. This was coordinated with the local Sheriff with paddy wagons and the whole works. The plan of attack was set out. On the 18th more Troopers arrived at that parking lot.

“At that time they were approached by Onondaga resident, Stone Horse, who told them that it was a peaceful gathering. He noticed they had all taken off their name badges and asked them why. The Troopers said that the pins might hurt and distract them, even though they were sporting guns in their holsters. [Do we think maybe they didn’t want their name badges damaged? Were they taking themselves out of their own persona and putting themselves into an adolescent street gang that could run rough shod over Indians with impunity? It’s not their badges that beat us up. It’s them! They still are what they are – New York State Troopers!]

“Stone Horse told them that a few people would be handing out flyers and that there would be cameramen there. The people were not on the road for a short time. Stone Horse said, “We are off the road. What do you want us to do?”

“The police were asked if they gave orders to us to disperse. They said, “No!” They started to arrest whoever they could lay their hands on. Why? They did not know why?” Did you see a gun there? “No!” they replied. Was politics running the police? Was it premeditated? They were going to arrest and kick ass, according to them. The Troopers said that we refused to leave the road. We were not on the road as they started to attack us.

“We have a very important story to tell. There are two issues we want to deal with. What is the New York State Police “Indian Detail” Division? We know that the outside police cannot go on our land and onto private property.

“One of the plaintiffs spoke about the case. He said that we are not taxable by a foreign government. We were celebrating its acknowledgement. Our people stood up against an illegal attempt to bring taxation against our people. We won in the court. Governor George Pataki said that he was going to be the first Governor of New York State to “put the Indians in their place”. The Chiefs worked with New York State to sign an illegal taxing agreement which had just been rescinded. It was a difficult day for us. We are a sovereign people to this day. New York State cannot impose their will upon us. We had a rally in April 1997 in Albany to make this point. Those who came were a cross section of every segment of the onkwe’hon:we communities. Today Attorney General Eliot Spitzer is trying the same fraud.

“We told Bob Bateson of the NY State government, “You can enter all the agreements you want with any of the so-called chiefs and leaders. If the grass roots people do not agree, then you have no agreement and you cannot enforce it. That’s the law!”

“On May 18, 1997 New York State Troopers acted illegally. The leaders were so intent on proving how mighty and powerful they were. This attack shows how warped their minds are. Within three days Governor Pataki called a press conference at the Museum of the American Indian. When his helicopter landed, he came directly to the Dialogue Team of the Iroquois who were there. He put out his hand and said, “I am so happy to see you here. You are going to like what I am going to say”. He went up to the podium and said, “From this day forward we are going to respect the sovereignty of the Indian nations”. 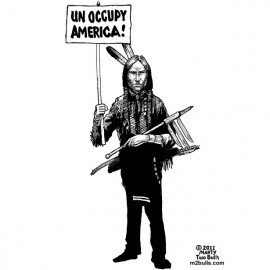 “Yes, he backed down on imposing taxes on us. Instead he is collecting taxes by setting up “revenue sharing” schemes with the “tribal” chiefs and councils set up under federal Indian law. This violates the U.S. Constitution and the Indian Gaming Regulatory Act in violation of international laws that respects self-determination. He is ignoring the peoples’ sovereignty by getting the tribal councils to force us to pay taxes to him without consulting us and without our consent.

“Now his Attorney General Eliot Spitzer is starting the same war with us again, trying to fraudulently bring in the taxation process against us. Our parents, grandparents and great-grandparents were all in this war. We have said that never again are traitorous chiefs going to do what they have done to us.

“We can’t go to our ancestors as they are not here. Should we leave the burden to our children? New York State violated its own laws. Federal Indian law is illegal. We are reminding the colonists that this is our land, our jurisdiction and we have a right to identify ourselves. The colonists must respect the Two Row Wampum and the Great Law. We were born free and are still free. We never agreed to be American or Canadian “Indians” and never will. 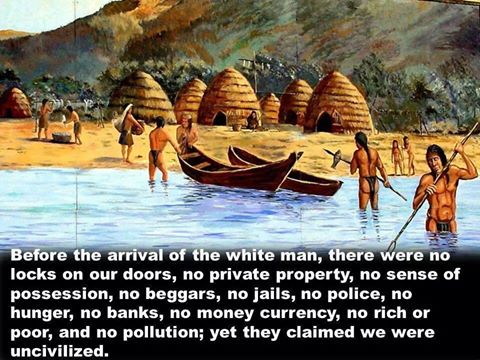 rotino’shonni getting ready for Sept. 20 trial in Syracuse court.

“This was part of the resistance by the Iroquois people against the oppression on Turtle Island . For this reason, the Six Nations people are always facing hatred from the corporate controllers of colonial governments and institutions in Canada and the United States . As the guardians of northeastern Turtle Island they want to eliminate us. This is why these states and their corporate interests are exerting so much brute force on us. Our defense in this case with New York State and others is to live according to our constitution, the Great Law of Peace.”

We are free people. We want everyone to know. Dobie Gray sings: “Day after day I’m more confused. so i look for the light through the pouring rain. you know thats a game that i hate to lose. feeling the strain. aint it a shame. gimme the beat, boys, free my soul, i wanna get lost in your rock and roll, and drift away”.