May 31, 2014. Movie star, Steven Seagal, came to visit his family in Kahnawake. They held a private family gathering. The Kahnawake Survival School singers sang and the people danced. Steven Seagal joined in. His family goes back to the 1704 raid on Deerfield Massachussetts when his ancestor was a captive from that raid. Deerfield Raid 1704. She lived in Kahnawake, became a Bear Clan Mohawk woman, had three children and died at 89 years of age as Kanenstenhawi [she brought corn]. Seagall is heading to Akwesasne to meet more of his family there on Monday. 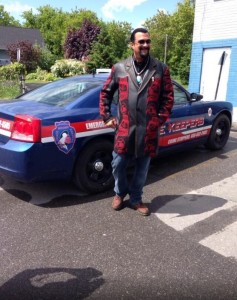 The corporation of Canada sent in its two oldest corporate point men, [Indian agents] to steer the agenda and to control the local media. Jesuit trained Dan Brant Dan Brant and Andrew Delisle Sr. Andrew Delisle Sr. were dragging themselves around trying to control who Mr. Seagal spoke to at this family affair. The Jesuits have always tried to steer us since 1534 when they sent their agent, Jacques Cartier. The Jesuits have never stopped in their genocidal quest.  They have always tried to take over our community by trying to break up the family through “owista”, a disease of the mind which puts “me” before “we”.

The MNN editor was able to talk to Mr. Seagal. He was told about the 1710 International World Peace Meeting in London that our chiefs initiated. He heard about the wampum belts given to Tsar Peter the Great now being in Russia. We have been contacted to help them to interpret the meanings. He turned to me, his brows lifted and his eyes opened wide and he said, “That was just after that Deerfield raid and my ancestors were here,” as he pointed at the ground. He suddenly realized that he is Mohawk and half Russian! He shook his head in approval and said, “I will help!”  Canada threatens ancient Mohawk allies.

We heard that Steven also has a blues band. When they’re singing Muddy’s song, it could be about Mr. Seagal himself: “A gypsy woman told my mother before I was born, You got a boychild’s coming. He’s gonna be a son-of-a-gun. He’s gonna make pretty woman jump and shout. Then the world will know what this is all about”.Muddy Waters. “Hoochie Coochie”