MNN.  19 FEB 2011.  The Kaianerekowa is the Great Law of Peace.  It is not a religion.  It is a philosophy of freedom meant for all.  Over 100 million Indigenous people in the Western Hemisphere were killed in the biggest holocaust in all humanity.  The Mohawks always peacefully resisted Canada and US colonialism and international bank directed dictatorship because we remember the genocide.

According to our birthright we can never relinquish our lands and resources.  We never have.

In the past when the colonial entities murdered our chiefs, the people took over.  The power is in the people.  The leader is the spirit within the people.

In 1990 our burial grounds and ceremonial site at Kanehsatake were going to become part of the Oka Golf Course in Quebec without our knowledge or consent.  Two Mohawk communities, Kahnawake and Akwesasne, stood up immediately to support the resistance of our brothers and sisters. 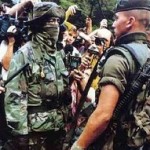 Early on the morning of July 11th 1990 Quebec sent in a para military SWAT team.  They opened fire on the men, women and children who were camping and peacefully protesting.

A 78-day siege began.  In August 5,000 Canadian soldiers surrounded three of our Mohawk communities, with tanks, snipers, lethal weaponry and top generals.  They had orders to massacre us if we fired one shot.

The world watched in horror as a few of us stood nose to nose with the military forces.  We women stopped shots from being fired by anyone.  Supporters stood ready to defend us.

International pressure forced the military to pull back. On September 26th we came out to go home.  The soldiers and cops beat us up.  One child was bayoneted in the chest.  We were arrested and charged.  In the end three of our men served sentences.

Afterwards we were hunted down like criminals.  We were called “terrorists” and insurgents for defending ourselves.  The Canadian government bombarded us with pacification brainwashing programs to help us get over or forget their brutality.

Historically we Mohawks never cooperated with the corporations and bankers who invaded us.  We constantly point out the illegitimacy of their existence on our land that wants to steal our birthright.

Like us, the Wisconsin protesters who are being fleeced by the government, want to keep what they have.  The government wants to bust the unions because they are a non-government alternative source of the peoples’ power.

A public increasingly unemployed, broke and homeless is told to obey while trillions are spent on the military complex, wars, no fly lists, spying, neighbors reporting them, scanning everything or being falsely charged with treason for uttering the truth.

Our Indigenous communities are, in effect, concentration camps.  They are controlled and protected by foreign colonists and entities through their highly paid band and tribal councils.  We, the landowners, are the poorest of the poor.  We never resisted for money.

Tyrants are foolish to rule by fear.  There comes a time when uncompromising anger dissolves fear.  These disposable dictators and their puppets will all be gone.

Tyranny is being challenged everywhere.  The dictators using mercenaries to protect them and enforce their will further weakens the decaying empire.  Their high tech death squads guard them and brutalize their people for money, not loyalty.

Our philosophy instructs us to fight until we win.  When the black belt falls and hits the ground, we must begin the resistance.  We cannot stop until we win or we can’t fight any longer because we are all dead.  We have stood up to overwhelming odds and held them off many times.

Our struggle empowered us.  We exposed the truth, stood defiantly and maintained independence.  We never relinquished anything above and below the ground.

There were risks.  We protected our people under the guidance of the Great Law of Peace.

We never gave the dictators what they craved:  obedience, cooperation and submission.  We cannot because submission to anyone violates the Great Law.  We are equal and have a voice.

In the end the thugs couldn’t overcome our lack of fear.

The Arabs lived under the gun and are now removing their terrorists.  They know that no one will free you but yourself.  No one can tell the Arab tribes they cannot help each other.

Awareness brought down their tyrants.  Here on Turtle Island, the people don’t see the gun yet.  Tyrants know we have a right to freedom.