MNN. JULY 14, 2018. Yes, in 1990 we unwrapped the corporate ropes from our necks! “On July 11th 1990, the Surete du Quebec [Quebec Provincial Police] opened fire with automatic guns and tear gas on kahnienkehaka [Mohawk] men, women and children. The Mohawks had been protesting the town of Oka’s plans to expand a golf course over a burial ground and common native land called The Pines kanehsaktake. Nearby Mohawks of kahnawake responded very quickly to fellow Mohawks of kanehsatake by blocking the Mercier Bridge, which connects the southshore to the island of Montreal. 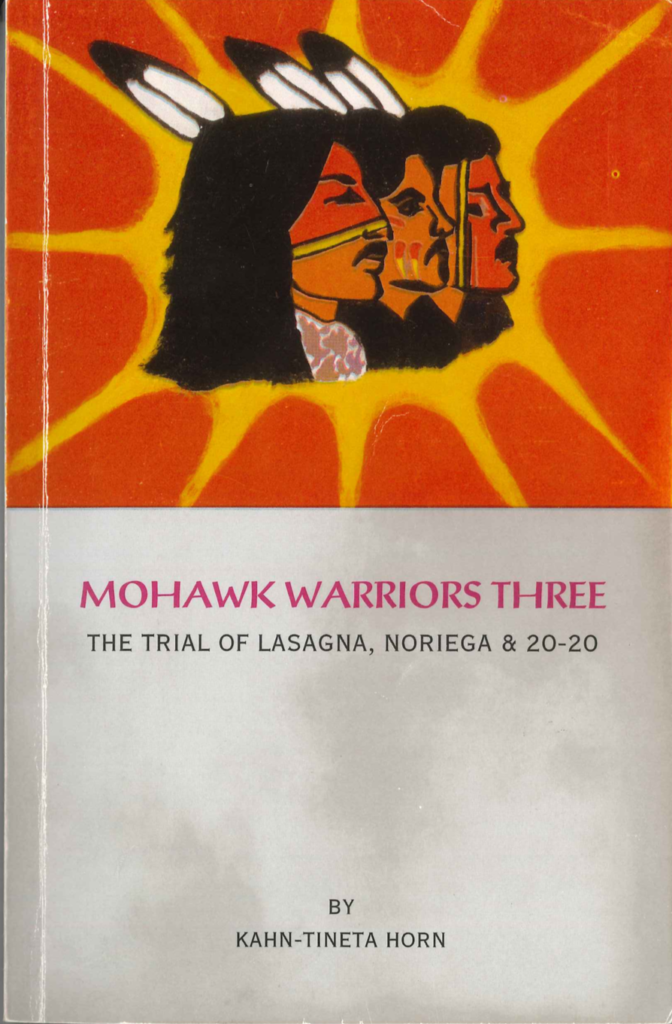 TURTLE ISLAND WILL ALWAYS BE THE HOMELAND OF THE ONKWEHONWEH!

“The world watched in amazement while a small nation faced the combined fire power of the Canadian Armed Forces, the SQ and the Royal Mounted Police.

“It was a fight for Mohawk identity and land against the oppressive designs of a modern nation state. The stand off after 78 days came to an end.

“The Quebec and Canadian governments maintained to the end their position that the Mohawk defenders were criminals and terrorists who threatened the public security of all. Out of this perspective Canada and Quebec quickly brought Mohawks defenders to trial on criminal charges.

“The first trial is the subject of this book, which starkly shows the continuing conflicts in perspectives between the Mohawk people and the Canadian and Quebec governments. The Mohawks transcended the boundaries set up by Quebec and Canada under a European nation-state model.

“Lasagna, from kahnawake, Noriega and 20-20, from akwesasne, were caught up in the events with their people in kanehsatake/Oka. The three were ordinary Mohawk men who found themselves in the middle of a fight for identity, recognition and a war against oppression by the Canadian and Quebec governments. They maintained their silence throughout the trial, a statement of their non-compliance with the use of coercion, threats and force of arms against the Mohawk Nation. . . . .

READ THE BOOK: THE MOHAWK WARRIORS THREE, The Trial of Lasagna, Noriega & 20-20:

TODAY AND TOMORROW, JULY 14 AND 15, A POW WOW IS HAPPENING ON THIS VERY LAND TO REMIND US OF SOME OF OUR PAST STORMS: