MNN. Dec. 9, 2021. [Thahoketoteh of MNN on FCC v kahnistensera]. Arrangements were made with SQI lawyer, Alexandre Rouan Bazinet, last week to discuss transfer of all keys for the Royal Victoria Hospital to the kanistensera, to house the indigenous homeless. Notice of the meeting was sent to the SQI, City of Montreal, McGill University, Stantic Construction Company, the Montreal Police and McGill Security. Official kenienkehaka Mohawk Nation protocols were followed throughout. 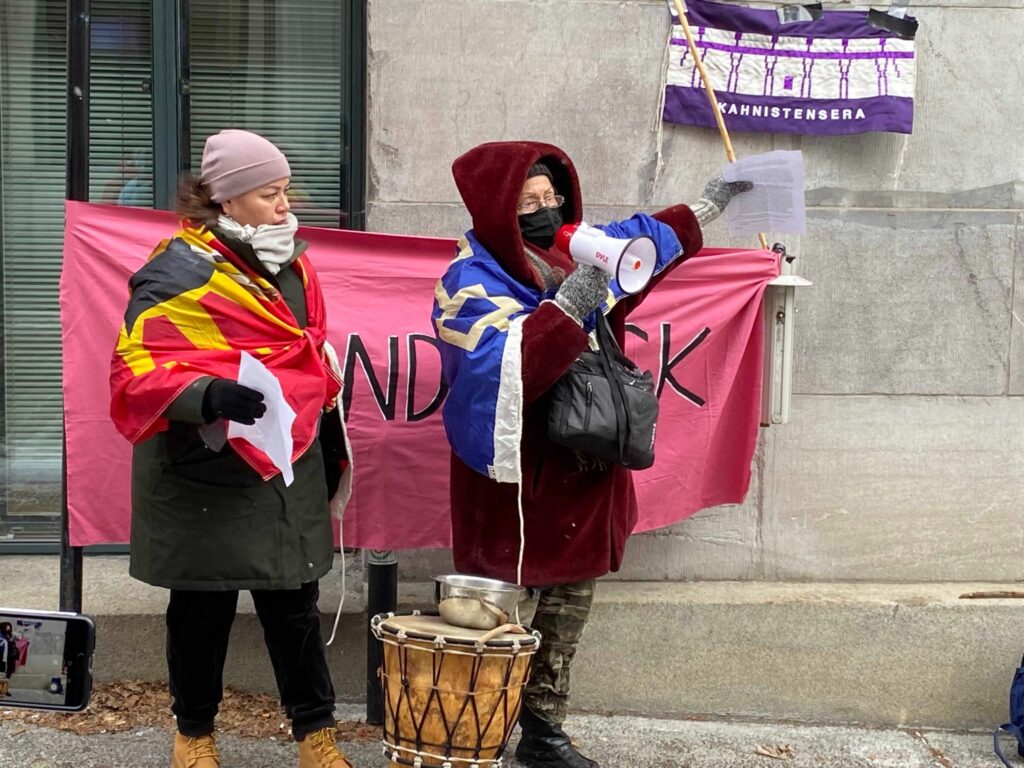 A report is being carried to the men’s fires of Iroquoia. McGill and Quebec both deny ownership of Mount Royal as it was the Mohawk village of tekanontak. Bazinet is the lawyer for SQI in a Federal Court of Canada motion T-1696-21, filed by the kanistensera. At the Public Consultation Commission hearing on the Royal Vic Project, the SQI was declared to be “owners” of the property under Canadian corporate law. Both SQI and McGill are now denying being the owners of Mount Royal as they would be guilty of dealing with stolen kanienkehaka property under the kaianerekowa, great peace, and Canadian corporate law. Moreover they prepared their own militia to brutalize the elders and supporters. A full criminal investigation should be done with regard to this outrageous armed assault, abuse, threats and bullying so the public is aware. https://www.youtube.com/watch?v=8fL0Easmd-4

And a text written by the Milton park allies below!

Yesterday, at 11.35, DEC. 8, 2021, the Milton Parc Citizens’ Committee organized a peaceful protest to stand with the Kanien’kehá:ka Kahnistensera [Mohawk Mothers]. 25 to 30 people of all ages were present to retrieve the keys to the Royal Vic, a subsidiary of McGill University. After speeches, elders and mothers of the Nation entered the SQI, Province of Quebec Department of Infrastructures, office building. A police officer standing outside, speaking to a liaison, threatened to declare the protest illegal, and to begin arrests of those who remained. Police alleged protest members were blocking the doors to the offices. This could not have been further from the truth: the protest was very remote from the door to the offices. The police then threatened, again, to declare the protest illegal this time unless the name of the event organizer was disclosed to them. There is no legal obligation to disclose such information to police officers. It is bizarre they made such an insistence, and it is certainly not grounds to declare a protest illegal.The right to silence protects privacy.

Inside the building, mothers and elders asked to speak to a member from the SQI who they had made an appointment with and who the mothers and elders informed that they would be coming. The mothers and elders were not aggressive or confrontational. However, the police, visibly permitted by the SQI, quickly escalated the situation. The police did not allow the mothers to wait in the waiting room until they could make contact with a representative. One officer clearly attempted to intimate and provoke an elder, just as 20-25 police officers rushed into the building, scaring the protesters outside who were unaware of the events taking place in the offices. All these events unrolled in a time period of roughly 20 minutes. One of the people assigned to accompany the elders was forced by police to turn off their camera, and a journalist from Le Metro had their camera punched by an officer, as assault. The journalist later said to an organizer that they had ‘never experienced such direct aggression from police, despite years of covering protests.’ The elders and mothers were then violently shoved out of the SQI offices.

As this scene became visible, the crowd outside was completely shocked and disgusted; turned on their cameras and quickly began admonishing the officers. It is a great shame that the police and the SQI allowed the situation to escalate, and for violence and threats to be delivered to citizens; as well as elders and mothers whose nations are traditional caretakers of this land. The SQI is directly responsible for this police response. The Royal Vic has turned into the subject of a serious land dispute. As such, this heavy, disproptionate response from the SQI and the police only perpetuates a harsh colonial legacy, shutting down attempts at dialogue and respect between members of different nations with the threat of armed force. No matter the resistance: we remain true to our struggle for human rights and justice.