MNN. June 3, 2015. Judge Murray Sinclair of the private Truth and Reconciliation Commission Inc., reminds us of the Warren Commission on the cover-up of the Kennedy Assassination. You were authorized by our butchers, the CROWN, to complete their goal of getting away with genocide. You made an oath to the Templar Bar in London when you became a bar lawyer.  You are an agent of the CROWN. 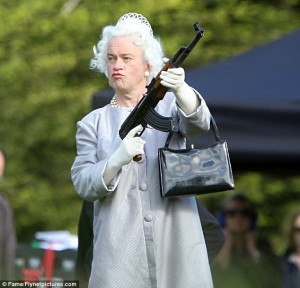 Queenie: “Have you got me covered, Murray!”

Instead of charging the CROWN, you suggest that we all take an oath to our murderers. Should the oath be, “Please don’t murder anymore of our children, Queenie?” You are protecting the large population of settler colonialists who are illegal immigrants on our land. They benefitted the most from this genocide. We are the direct line of the first people of ono’ware:geh, tied to our mother through the women. Foreigners can never have this relationship, as clearly expressed in the teio’ha:the. The incorporated INDIANS have already taken an oath to assist in completing the CROWN’s business plan for total termination by 2024. All your recommendations amount to a grand sweeping of all your colonial dirt under a big royal carpet. 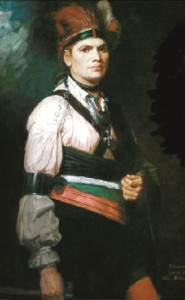 “Oh, it’s Judge Sinclair! Can I have an autograph?”

Their mother is from across the ocean. They will never know peace until they go home. They arrived here sickly. We and our good mother took care of them. Land was set aside where they could live, practice their beliefs and make laws for themselves, until their mother calls them home. When the babysitters are abused, neglected, and their funds withheld, they just won’t babysit anymore. The invaders want to continue to rape and desecrate our mother for the benefit of their pyramidal shareholders. They illegally took over our land using their Admiralty matrix, which is a complete illusion.

Their idea of citizenship within their Admiralty matrix is for them to have complete sovereignty over us. kaia’nereh:kowa, our constitution, the law of the land, won’t allow this.

Early in our relationship, the women saw them as iah onkweh ti and suggested they return to their origins. We saw their mind was dishonest and they were ruthless. We took them into the sanctity of our home and family. We saw their paedophilic ways and knew we could not trust them with our children. To protect them, it was decided they should live apart from us according to the teiohateh. Residential schools are no longer visible. It is now the “missing and murdered women” which has been institutionalized.

Man-made laws and laws of nature are different. All humans, animals, plants and living things have their territory that sustains them. The white man took over the role of mother nature with their corporate Admiralty statute law.

Their genocide continues with economic sanctions against us, criminalization, targeting, denying us use of our lands and interfering with our efforts to support ourselves. “Sorry for murdering and robbing you” means nothing. You can’t fix what you broke. You will not decide the reconciliation for your brutality. You still want total extermination. You criminals will answer for this in a proper international venue. 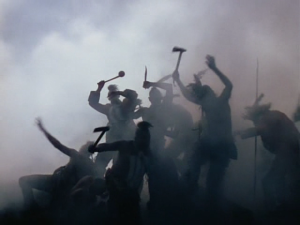 We don’t want revenge. We want to make a better future for our children. The offer of their fiat currency is their attempt to buy their way out of the crime. Manipulating our minds is over. We cleaned our eyes with the softest skin and ears with the eagle feather. We see their agenda clearly. We call our international partners of the world to apply pressure on the corporation called Canada and hold them accountable for the crime of genocide.

We are a united people who will establish peace by any means necessary. The black wampum is the last offering of peace when we have exhausted all avenues. All animals in nature avoid conflict. Bear, wolf and others will try to run away from a fight. When they are put in a dangerous situation, they will defend themselves. Every living thing on earth has that right to self-preservation.

As George Thorogood suggests about Murray “Terminator” Sinclair, “On the day I was born, the nurses all gathered ‘round. And they gazed in wide wonder at the joy they had found. The head nurse spoke up, said “Leave this one alone”. She could tell right away that I was bad to the bone!”

Pope is not god.