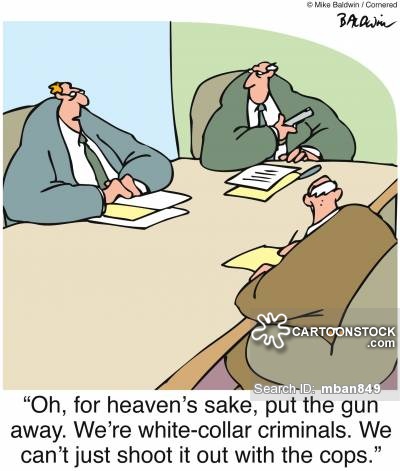 At a previous meeting you told us that Christine Deom is the liaison with the Privy Council, that manages the corporation for the shareholders. We Ongwe’hon:weh want a meeting with the Privy Council. They have breeched the Teio’ha:teh/Two Row Wampum. We need to renegotiate this for all our nations.

On October 25, 1924, the band councils were forced on us across Canada. The RCMP shot our chiefs in the head in the longhouse. The band council system is archaic and illegal. You representing this system means you are complicit in genocide.

MCK is incorporated or you couldn’t get a bank account. Actually, you are an actor for your overlords. You do not act for us. Your secret meetings to sell our land indicates that you only act for the Corporation of Canada. You said, “Negotiations are based solely on Seigneury interests, not rights or title”. “There will always be an underlying interest in these lands”. As the acting INDIAN for MCK Inc. you totally affirm the CROWN has the ultimate authority over our land. You have forfeited your birthright! 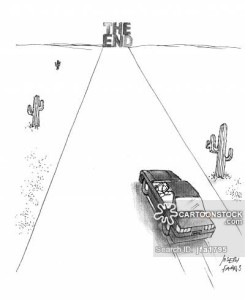 In 1979 the community had a referendum to return to the Great Law. MCK Inc. has never affirmed that referendum. You are violating the will of the people. Band councils are an archaic foreign entity who act against international law and the true law of this land. Your attempt to sell our birthright is punishable by death, according to the Kaia’nereh:kowa. Wahatisokwariteh. Mike, it’s time for you to learn about the Great Law. The band council is a festering sore. The plantain medicine that mother earth provides will draw out any foreign puss and heal the wound, as Kaia’nere:kowa does.

Saying “We no longer live in those times” means there is no more Kaia’nere:kowa in your mind. Kahnawake is the Great Law. Because you are assimilated, you say we are in full development as INDIANS and no longer follow our law. You are talking about yourself and your 300 followers who voted for you in the illegal elections. The Canadian government says we non-voters acquiesced. We cannot legally vote in this system. If we do, we forfeit our birthright, as you have done.

You do not know the Kaia’nere:kowa or you would not be trying to order us around. Your pyramidal decision making structure is archaic. Sitting at a table negotiating the birthright of our children is like a man having raped your daughter. Now he wants to sit with you and negotiate how many more times he’s going to rape your daughter. Just tell them our land is not for sale and there will be no pipeline. Mike, your mind has been clouded by the fog of colonialism.”

As the traitors will be singing from their jail cells, Johnny Cash sings: “I bet there’s rich folks eating from a fancy dining car. They’re probably drinking coffee and smoking big cigars. Well, I know I had it coming. I know I can’t be free. But those people keep a moving. That’s what tortures me”. [Folsom Prison]. 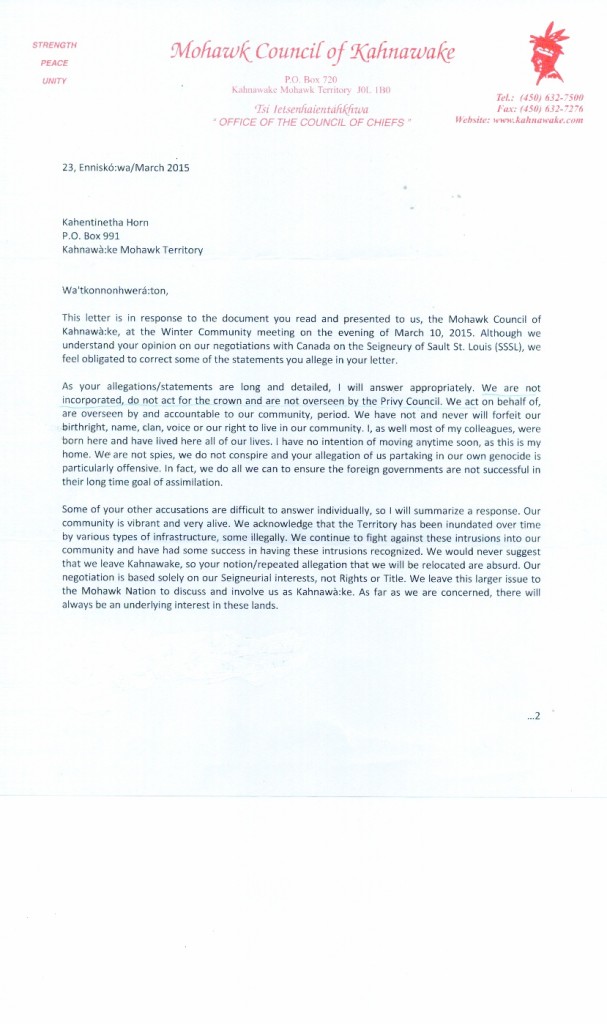 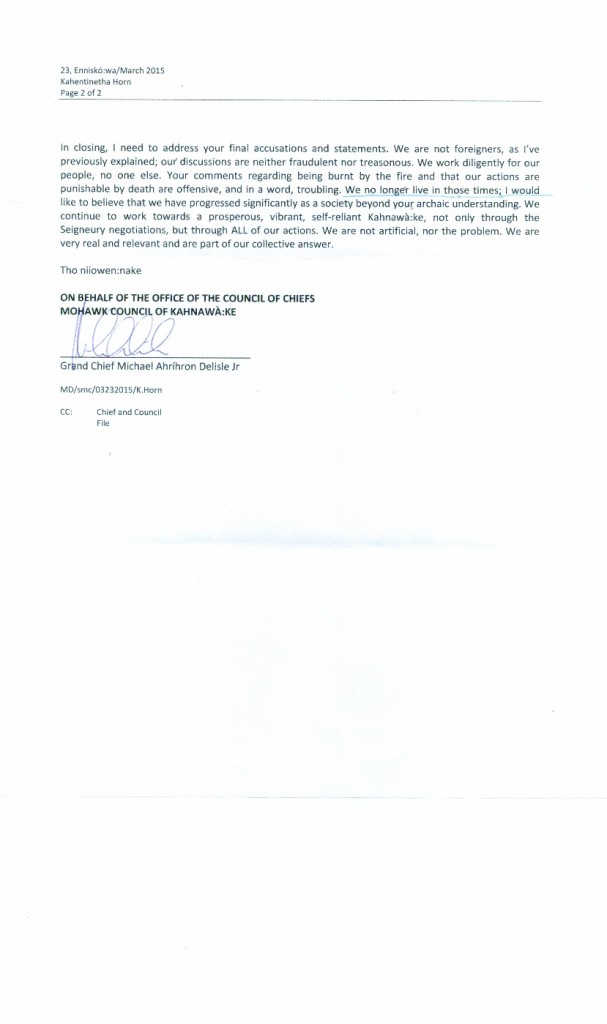 MNN. AUG. 15, 2013. The MacDonald-Laurier think tank has published a report on “Canada and the First Nations, Cooperation or Conflict”. The board consists of CEOs of energy corporations and other rulers. Discussed at length is how to start an Indigenous uprising in order to execute the Warriors! This report is their “Mein Kampf” for the total physical and mental extermination of Indigenous people. 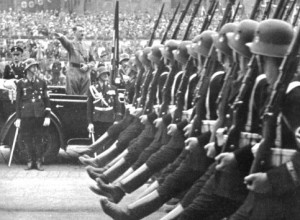 MacDonald-Laurier think tank troops marching into Roseau River: “Where is that Terrance Nelson?”

Indigenous men they call “Warrior Cohorts” are feared because of the colonial demonization program. Starvation and genocide failed. Our population increased by 45% between 1996 and 2006. By 2017, 42% of Indigenous People will be under 30 years of age. Canada exists on illegal extraction of our resources and selling/transporting them to far-off markets. Limited security forces makes Canada vulnerable. The anxiety is that “Indigenous can chose the challenges!” because resources and transportation lines are on Indigenous territories that were never surrendered. A conflict needs to be instigated to bring in military forces to protect corporate interests! Legitimate dialogue is to be avoided.

Their strategies are based on a deep misunderstanding of the Mohawk Oka Crisis 1990 and Six Nations/Caledonia 2005 resistance. A unified Indigenous people is dreaded. They rely on the advice of their corporate band council and national Injuns, whose job is to distract, pacify, keep us ignorant and maintain 3rd world living conditions.

The main transport hub is Winnipeg Manitoba. An 85,000 “Warrior Cadre” could easily overwhelm 52 small RCMP detachments. One disruption could lead to resistance in other places. Their figures are extremely low!

The main strategies are to avoid respect for Indigenous sovereignty; criminalize the young “Warrior Cohorts” or “child soldiers” they call “young thugs”, who are all “violence prone”. Build more jails. Find the charismatic leader who will appear, unify and lead us! Heh! Heh! Heh! 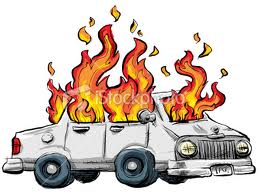 Rez cars are all we have!

“Indians have no weapons”. Those elders, women and children sitting on tracks have to be subdued! Confrontations could be old cars burning on and warping railroads” [which all belong to us as everything was built with our funds!]

Immigrants selling off our possessions is over! Can the rightful Indigenous challenge to the corporations be overcome? Disarm the Warrior Cohort [who have no weapons]. Threaten us to give up our claims to inherent sovereignty. Deathly force, if necessary, for short-term protests. Long term response is being developed.

“Indigenous can use scarce resources efficiently and attract international attention”. Infrastructure on our land is a powerful tool of influence.  Indigenous are about stopping the destruction of our Mother Earth versus “The government will prevail”. We’d like an accounting of the Corporation of Canada’s spending of our ever-growing $365 trillion Indian Trust Fund which comes from the illegal sale of our resources. Canada cannot claim sovereignty when no documents exist that show we surrendered anything to anyone. 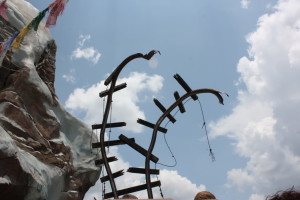 The Kaianerekowa/Great Law of Peace prevents us from failure.

Johnny Cash knows such Nazi MacDonald-Laurier gangsters are going to jail in the Fatherland: “I know I had it comin’,
I know I can’t be free…”Folsom Prison Blues