MNN.  JAN. 17, 2013.  US & CANADA corporations merged on February 4, 2011.  They have the same shareholders, owners and business plans for illegal resource extraction. Canadians and Americans have not been informed. The EU Times in Europe made the announcement on January 17, 2013. In effect, this is Hitler’s 1938 “Anschluss”, the takeover of Austria by Germany.  Canada is now a substate of the US.North American Union in E.U. Times 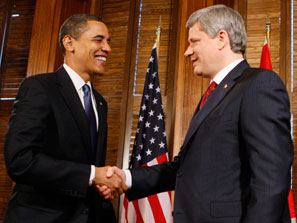 In 2004 President Bush and Prime Minister Martin signed the “911’ Agreement allowing the US military to invade Canada anytime the US deems it necessary to eliminate “terrorist threats”.  Essentially, Canada is under martial law.

Our Indian Trust Fund is over $3 trillion, coming from monies set aside from the exploitation of our resources. It is set aside according to international law treaty requirements. The oligarchs who run the world are stealing it. The banks, Vatican, Queen, World Bank, International Monetary Fund and the families in charge have been dividing it amongst themselves.  The fake bankers’ world economy is based totally on continual war.

Canada is the third biggest country in the world. The oligarchs cannot make war without our resources.  The shareholders of the country corporations illegally sell our raw materials to each other.

The corporate merger of 2011 benefits big business, banks, big oil, drug companies and their war-making machine. Our materials are needed to attack anybody who stands in the way of resource extraction. The military tell Congress, Senate and Parliament who will be bombed, or their economy will fail.

Our materials make weapons to kill our brothers and sisters in all parts of the world. We can stop the war by stopping the resource extraction from our homeland. It violates our laws.

Since WWII the US military has invaded 60 countries to continue imperial war.  To make guns, bombs, tanks and weapons of mass destruction, the raw materials come from Canada, such as coal, oil, gas, food, wood, aluminum, steel and compites.

Except for rubber, all these materials are available in Canada.

War-mongers spread lies through deception, disinformation and finally false flag wars. They scream, “Get rid of the Indian Act.  Bring in Bill C-45 to expedite resource extraction”.  The genocidal Indian Act is illegal and will be eliminated. Control of Great Turtle Island will return to us, as Creation intended.

We will stop war the world over by stopping the illegal extraction. We will never support any war. Kaianerekowa directs us to support peace everywhere on earth through mutual consensus.

As Edwin Starr sang: “War means tears to thousands of mothers’ eyes.  When their sons go to fight and lose their lives.  I said, WAR, huh, good God.  Y’all, what is it good for.  Absolutely nothing.  Say it again.” Edwin Starr: War