MNN. Apr. 12, 2015. Military is moving weapons of war to the West. Trains are loaded with tanks, trucks, jeeps. armoured personnel carriers for the troops. The mainstream media mentions nothing to the public?

This army is how the pipeline police will look. At the same time ongwe’hon:weh communities are being visited by international energy corporations to “consult” us about their plans. Kinder Morgan visited Schoharie/Akwesasne . Two young people informed us that Enbridge had invited them to a secret meeting to talk about their plans for a pipeline through Kahnawake.

Now non-ongwe’hon:we are tracing the roots to the tree of peace. They are asking us to help them fight fracking and other environmental devastation. 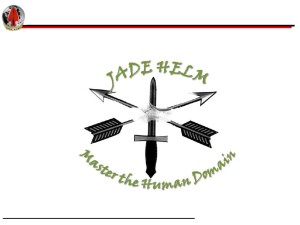 The US military is conducting a massive drill for martial law from July 15 to September 15 this year. [See Jade Helms Drill below]. During the drill, soldiers will operate “undetected amongst civilian populations” to see if they can infiltrate without being noticed. Americans will be encouraged to report “suspicious activity” during the exercise to gain the public’s trust.

Settlers getting ready for war.

Dekanawida said the enabling act of the Haudenosaunee is that all affiliated with the Kaia’nereh:kowa have access to the dish with one spoon.

As the Grateful Dead mention: ”Driving that train, high on cocaine,. Casey Jones, you better watch your speed. Trouble ahead. Trouble behind. And you know that notion just crossed my mind. Trouble with you is the trouble me. Got two good eyes, but you still don’t see. Come round the bend. You know it’s the end. The fireman screams and the engine just gleams”.