MNN. Mar. 17, 2015. The mark of the beast is the corporate signature you are forced to use to do any business. It means we have turned ourselves over to the corporate beast to be their slaves. 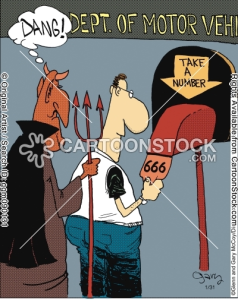 “He causes all, both small and great, rich and poor, free and slave, to receive a mark on their right hand or on their foreheads, and that no one may buy or sell except one who has the mark or the name of the beast, or the number of his name.” Revelation 13:16-17

The beast is the private corporate system of 51% majority rules and the root of all evil.  The Vatican is the CROWN, the root corporation, that issues all corporate ISO numbers. Every CROWN corporate country like Canada gets a number that allows them to do international banking. They then issue numbers to us so that we can do banking. No transaction can be made without those banking numbers. The beast has us all in its grasp. The banks are the devil set up by the Vatican as gatekeepers of the matrix we are all now prisoners of.

The result is absolute total control of everyone. We are coerced into begging for that number to do almost every transaction. We have to be paid through a check that is cashed into a bank account. Filing an application for anything is legally begging for what naturally belongs to us.

In corporate society everything is monetized. The whole education brainwashing system drills this into our heads. Education is based on making it easier for everyone to accept the idea that whoever has the most money makes the rules. That’s how the bankers control all the money in the world.

1% dictates to the 99% of the world. In Kahnawake the Mohawk Council of Kahnawake Inc. is presently trying to monetize our land. This would allow Canada to take our land issues to their Admiralty court.

Pink Floyd tells us about the this conundrum in “Brick in the Wall”: “We don’t need no education. We don’t need no thought control. No dark sarcasm in the classroom. Teachers leave them kids alone. All in all, its just another brick in the wall.”

MNN. May 29, 2013. The Queen, representing the Crown Corporation [13 bloodlines] in 1867, set up the Corporation of Canada for business purposes under the Law of the Seas. She said, “Look at these resources! Let’s do business. What about all those Indians. We’ll have to give them a cut, but we’ll control it.” The video at the end explains the Indian Trust Fund in more detail. 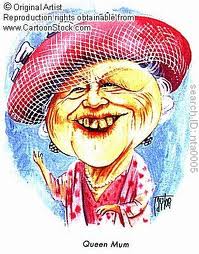 The Queen took 60% of the proceeds from extraction of our resources while placing 40% in a trust on our behalf. The trust existed since Queen Anne in 1701 and reconfirmed by the Royal Proclamation 1763. In 1867 the bankrupt provinces formed the CORPORATION OF CANADA. They appointed themselves as the trustee of the Indian Trust Fund which finances the entire corporation to this day. A Crown bank was set up that took in all our money. Her Majesty borrowed from it. Her Majesty’s military protects the treasury. 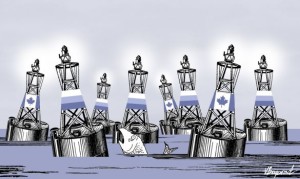 Law of the Seas. OCEANS ACT.

The Law of the Seas monetized everything, including the land and the people. It is trickery. The Law of the Seas was implemented on our land without our consent. It was a hostile corporate takeover of all the people in the entire realm [Commonwealth] which exists to this day. A business corporation was illegally set up inside our territory. Fraud was committed at the highest order. The laws of treason have to be applied for the theft and usurpation of our trust fund.

The invaders could never occupy, own land or take our resources without our permission. Her Majesty’s stores extracted, logged and traded. She started three more corporations inside our territory that cut down more trees, killed animals and tried to chase us away. In 1924 the Indian Advancement Act was enacted to create reservations for the Indians and turn over all the resource extraction business to the provinces. 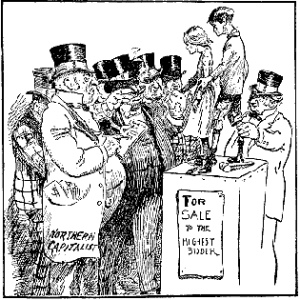 The subjects are owned by Queen Mum. A baby born in Canada is signed up as her property. She holds the deed or birth certificate, on each of them. They have a share in the commonwealth and defaults of the Queen. She can take the kids away and send them to war. Mom and dad work for the corporation. They get paid by Queen Mum to take care of her baby subjects through baby bonuses, tax credits, etc. Foreign corporation rules apply. At 18 years of age she absolves the  parents for selling their children into slavery.

When the child goes to work for the corporation, they take their birth certificate from a foreign jurisdiction to get a Social Insurance Number SIN. A surety bond is needed with a first and last name in capital letters. A docking receipt verifying the Queen’s ownership of the baby is sent to the nearest post office. It is one of the main military posts owned by the Queen.

All credit comes from the Queen through Crown. No one can do business without the sanction of the foreign bank.  No one can get a bank account in Canada without a social insurance number. Is this the mark of the beast? 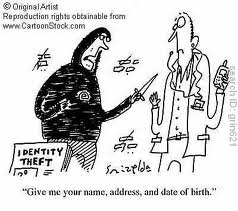 Our land was never ceded. It is deemed to be held in trust for us. We are forced to register our children. Identity documents are created by the Queen’s deeds without our consent. We are forced to enter her trap under “duress”. We are allies, not subjects and we continue to be the titleholders. As the Beatles sing in their take on identity theft: “I am he, as you are her, as you are me, and we are all together. See how they run, like pigs from a gun. See how they fly. I’m crying.”I am the Walrus