Please post & distribute.
MNN. Apr. 21, 2022. What’s the fuss over the Jay Treaty? It does not exist on great turtle island [the Western Hemisphere] for the sovereign indigenous people. International law exists as long as it serves the United States. So there is no international law. Article 2 of the Jay Treaty of Trade and Commerce 1794 acknowledges the that there are no borders for indigenous people because the supreme law of  great turtle island is the kaianerekowa and indigenous laws that have been here since time immemorial. Canada commits a crime when they refuse to acknowledge the kaianerekowa and do not allow indigenous from anywhere in the Western Hemisphere to pass and repass the artificial borders placed anywhere on turtle island by the invaders. 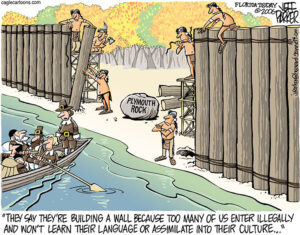 The Jay Treaty is between US and Britain to settle the colonial wars between them. great turtle island is one land for all indigenous people.
The band council is an administrative arm of the invading Canadian/British army that enforces the foreign”Admiralty Law of the Sea”. The Indian Act provides that the band council as Canadians have no authority to represent us because they violate the teiohateh, two row. The tribal councils in the United States do not represent the indigenous people either for the same reason.

This ‘imaginary line’ to exploit the people is made out of thin air. It exists only by foreign legislation and is not natural. Birds, deer, indigenous people don’t need statutes to move about on their land. 500 years ago indigenous people were naturally free to travel ocean to ocean, pole to pole. We are stopped, penalized, imprisoned and forced to live on small POW camps called “reservations” overseen and enforced by the “weaponized peacekeepers.” 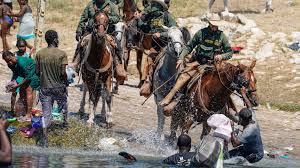 US VIOLENCE AT ILLEGAL BORDER AGAINST INDIGENOUS PEOPLE.

The kaianerekowa, great peace, and all original indigenous law is the law of great turtle island. In 1794 the Americans and British carved an illegal line through onowarekeh, turtle island, calling the north side Canada and the south side the United States and Mexico, but the same families ruled all sides of the pretend borders. Canada and United States will stop their criminality and totally remove the boundary and let all natives cross and recross freely. The South Americans cannot be stopped from moving north. The non-natives and their band and tribal councils have to live by the kaianerekowa or leave great turtle island.
When we go to the border, we can drive or walk through and tell the border guards to get out of our way. They have to open the gates for us as though they do not exist. Some remarks by indigenous when harassed at the border: “There is no Canada or United States!” Another was asked where he born. He said “Six Nations!” The immigration fella said, “You are Canadian”. His father corrected, “If a calf is born in a horse’s stall, does that make him a horse?”
Instead of lying, murdering and warfare the O’Jays sing that we should all get on the “Love Train”: “People all over the world everybody [all over the world] join hands with the love ride. Start a ‘love train’, ‘love ride’, ‘love train’. At the next stop that we make will be England. Tell the folks in Russia and China too” . . .
https://www.youtube.com/watch?v=MGW8kss-wcw
th**********@nt*.com mohawk nation news.com ka***********@pr********.com PO Box 991 kahnawake quebec canada J0L 1B0