MNN. 26, 2015. The majority believe the official story about 911, that 17 hijackers flew the two planes into the buildings. The official story is the steel columns melted from the burning jet fuel. Steel melts at 2800 degrees F. Jet fuel maximum burning temperature is 1796 degrees F. Tony Rooke put his mind on the problem, as we all should. He voiced his concern to a judge regarding the BBC’s complicity in the terrorist act of 911.

The BBC reported 27 minutes before Building 7 fell. Everybody in the world saw this. The judge agreed and ruled against the BBC. Tony Rooke does not have to pay is tv bill because he proved the BBC absolutely knew it was going to happen. 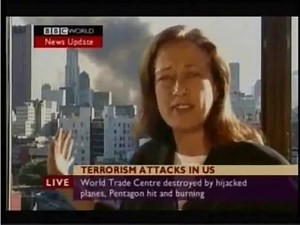 Super Tramp says: “Now they’re planning the crime of the century. Yes, its well worth the fee. Read all about their schemes and adventuring. Yes, it’s well worth a fee. So roll up and see how they rape the universe, how they’ve gone from bad to worse. Who are these men of lust, greed and glory? Rip off the masks and let’s see. But that’s not right, oh no, what’s the story? Look, there’s you and there’s me!? “ Just one of the crimes of the century …

CRIME OF THE CENTURY super tramp