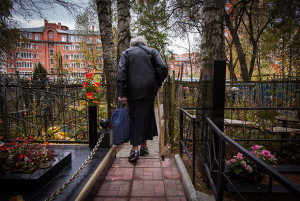 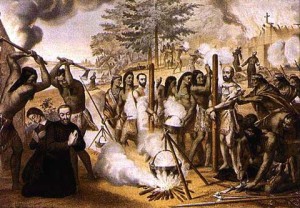 MNN.  27 June 2012.   The Great Peace of Montreal was completed on June 25th 1701.  It is the treaty that established the invaders’ right to live here.  Canadian history omits it.
The French sued for peace to end their 92-year war with us, called the French and Indian wars.
This treaty legitimized their presence on Great Turtle Island. All immigrants agreed to live according to the Kaianerekowa, the Great Law of Peace, through the Guswentha, the Two Row Wampum.  They would stay on their boat, not interfere with us, live in perpetual peace and could never own any of our territory.

Our younger brothers agreed to become of one mind with the natural world.  The Kaianerekowa is the great medicine that comes from the minds of humanity, to create peace and take care of each other.
This is the only legal means by which anyone other than an ongwehonwe can live here.
From the Arctic, Pacific, Atlantic and Gulf of Mexico  indigenous nations took part in the solemn ratification ceremonies.
In July 1701 we took the wampums to the British at Albany, who had taken over the Dutch colony of New Amsterdam in 1684.  They agreed to the same terms.  From here the Nanfan Treaty 1701 gave the British permission to live with us in peace.
In 1710 five Iroquois chiefs from each Haundensaunee nation went to Europe for the first and only time.  One chief died on the way.  They took the wampum belts to explain and ratify the Guswentha with the monarchs.  All 13 royal bloodlines attended.  Teeyeeneenhogarow, Sagaweathquatiethtow, Honeeyeathtawnorow and Etowohkoam were dubbed the “Four Indian Kings”.

The hierarchical heads turned the visit into a big circus.  They didn’t want peace.  Only war, ‘ordo ab chao’.
As a patriarchy they couldn’t let their women exercise female power.  Without it, the peace could not be adopted.
The American Revolution was the first false flag.  It was waged to destroy the Great Law constitution of peace and turn it into the US constitution of war.  In 1779, the Americans sent 13,000 soldiers to Onondaga, the capital of the Iroquois Confederacy, to try to destroy the peace forever.  They could never extinguish the fire of the people.
The British parked their ships in Quebec and took the year off so the Americans could try to finish us off.
Under international law when such a treaty is broken, everything goes back to one day before the treaty was ratified.  In this case, June 24, 1701.  We never surrendered anything.  They reneged on living peacefully.  They are squatters.
Once their hierarchy is gone and they give rights to their women, they can trace the roots to the Tree of Peace and establish peace with us.

Mohawks have not been to Onondaga since 1779.  We had to leave our home communities to save our people and maintain the peace.   Canada imprisons us here to continue their illusion of freedom, that this war was real.  It was all theatre.  The Mohawks will return to Onondaga to stand up the Tree of Peace.
That’s when our traitors will have to return to a proper mind with us. The women will give three warnings to the errant leaders.  If they do not heed their warnings, the war chief drops the black wampum.  They may grab it before it hits the floor and redeem themselves.  If it hits the floor, the warriors smash in their heads with the war club to remove their errant minds.
MNN Mohawk Nation News kahentinetha2@yahoo.com  For more news, books, workshops, to donate and sign up for MNN newsletters, go to www.mohawknationnews.com  More stories at MNN Archives.  Address:  Box 991, Kahnawake [Quebec, Canada] J0L 1B0

MNN.  On May 18, 2012, we stopped playing their games in their artificial court.  We came out with a little bit of their guilt money.
Exactly fifteen years ago, On May 18, 1997 we were attacked by New York State Troopers.  97 of us brought charges against them in the NYS Northern District Court.  Five have since died.
We people of all Iroquois Confederacy nations had gathered at the property of Andrew Jones on Onondaga Territory for a traditional ceremony.
As the sacred fire on private land burned, Oren Lyons and the Onondaga Confederacy Chiefs sent in the radical New York State Troopers to terrorize and attack us, using NYS Gestapo tactics.  Our freedom of speech, religion and assembly were violated.
The beatings, false arrests and denial of medical attention were video taped.
We, the men, women children and some babies were on the other end of NYS vicious assault.  They were like seal hunters trying to fatally harm us.  Our children were hurt.  Many were almost beaten to death.    We could not fight back because small children were running in our midst. While holding down an elder, a Trooper tried to snap his neck.
The Troopers said they were immune from being sued.   They lost at the first level, appealed and lost again.
On April 8, 2008 Judge George H. Lowe heard the evidence and decided that, if it went to court, we would win, sometime in the future.  They’re waiting for us to die off, and put it over to the next generation, telling us, “Get over it”.
The case was never about money.  Their system protects their puppets who protect them.  Their whole artificial admiralty system looks out for them.
We must deal with our criminal traitors, to take full responsibility for their brutality.  Some day, the War Chief holding a bunch of black wampum strings will say to the erring chief[s], “You have not listened to the Women and Men of the nations.  This wampum shall be dropped. If you don’t grab it before it hits the floor, and come to a good mind with us”, the men shall bash the erring chiefs to death with a war club. [Wampum 59, Great Law].
Ronnie Jones, the outspoken father of Andrew Jones,  tried to bring the issue of federal and state oppression by their corporate Indians, the Onondaga chiefs, before the UN.  A day after his return, he was ritualistically executed in his home.  His hands and feet were cut off and his stomach was sliced open.  His papers and documents were spread over his body and set on fire. Ronnie Jones did not die in vain.
NYS wants to deduct from the payout the cost of state medical care given to those they viciously beat, to pay for their own beating.  We are challenging this.
NYS agreed to sensitivity workshops to learn about us, our history, sovereignty and economic issues.  The people who brutally attacked us up shall select the trainers, advisers, designers and content.  [We are not stupid!]
We had to get out of their boat and remain in our canoe.  We refuse to let them try to steer us.
In “The River” by Thahoketoh:  “The river of life has many falls, twists and turns and steep walls.  We travel down it in our own way.  The same has been from the very first day.  I’ll stay in my canoe.  You stay in your boat.   I only hope you stay afloat.  I’ll smile at you.   You wave at me. We’ll continue on toward the sea.”
http://music.cbc.ca/#/play/artist/thahoketoteh/The-River
MNN Mohawk Nation News kahentinetha2@yahoo.com  For more news, books, workshops, to donate and to sign up for MNN newsletters, go towww.mohawknationnews.com  Address:  Box 991, Kahnawake [Quebec, Canada] J0L 1B0
Note:  Andrew Jones, et al v. Parmley, et al Civil Action No.:  98CIV-374 [FJS][GHL]