MNN. Dec. 3, 2014. As Don Corleone said, “We’ll give them an offer they can’t refuse”. The INDIANS known as the Mohawk Council of Kahnawake MCK were obviously trained at the school of dirty tricks. I saw these tactics played on our people when I worked at Indian Affairs. They tried to follow it at the December 2 meeting at the Golden Agers to discuss the Seigneury land issue.

Corpo INDIANS taking orders from the Crown: “Make them sign it!”

Canada needs Ongwehonwe consent for pipelines, resource extraction and so on throughout Canada. They want to remove the Mohawks out of Montreal, the same way the Americans wanted the Cherokee out of Georgia. The white people want to populate Kahnawake.

The Seigneury of Sault St. Louis is on Kanionkehaka land. Any deal between Canada and itself through their corporate councils is an internal deal amongst themselves. The Corpo INDIANS are not Ongwehonwe.

Sitting at the front imitating their masters, the INDIANS dictated the CROWN’s agenda. We were told to keep this a secret. The Great Law provides that all meetings are open to everyone. Every mind is important to the whole.

The INDIANS want to put us on the legal fiction called CROWN land? The INDIANS are trying to get us to agree to a price, as the bankers require for their fraudulent economy based on land theft. We are being offered 65,000 acres of our own land near the border, 24,000 acres towards Ottawa or a large tract near Mt. Tremblant, which is Algonquin land. The Seigneury with ten cities on it will become CROWN land. Kahnawake is not a reserve. Not CROWN land. They want us outside of the Seigneury where we have no Ongwehonwe interest.

We want everything granted to the British according the Two Row from 1701 that they accepted. This includes all of Ontario and everything West in what they now call Canada. it’s time for Britain to come to the table again with the Ongwehonwe to create a new wampum belt of reconiliation with us.

Everyone in the world knows it’s ours. The traitors among us are ready to make a deal. They are the cancer within. They have left our canoe and put themselves in the white man’s vessel. Te ho na ton ko ton. They have left the circle of the ongwehonwe and immersed themselves totally in the ways of the colonizers. They are no longer Ongwehonwe. They abandoned their mother and family.

When the meeting got hot, a disrupter, known in blogland as the “troll”, would rise up to deflect the conversation. Their lawyer approached me and said, “We were counting on your not showing up, because of your advanced age”.

Kahnawake will always be under the Kaianerekowa, not part of Canada. No filthy pipeline will ever come through here. We are Kahnawake! Kahnawake is us! We will never leave. We will always defend it. As Tom Jones reminds: “Yes, they’ll all come to see me in the shade of that old oak tree, as they lay me ‘neath the green green grass of home”. 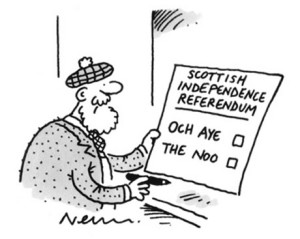 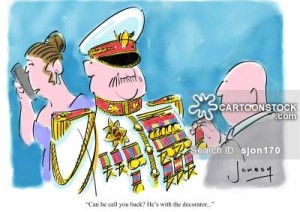 MNN,  Dec. 24, 2012.  We call for the reinstatement of the only legal contract allowing the settlers to live here, the Guswentha [Two Row Wampum].   It is the basis of the Great Peace of Montreal 1701.   According to international law, having reneged on this contract, everything reverts back to one day before it was ratified on June 25 1701.  They refuse to abide by it.  Their default of their contractual obligations to live in peace and be of one mind with us has been nullified and void.  They are illegal occupiers, squatters.

Prime Minister Harper, also known as “Pudge”, what are you waiting for? 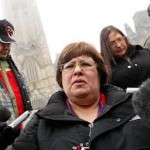 To let Theresa Spence of Attawapiskat die in her tipi in the cold, not far from your nice warm mansion at 24 Sussex in Ottawa, which sits on our land?  Go see her today.  Take her some food.  She is hungry.  We want her to live.  You seem to want her to die.  Why? 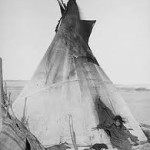 According to the natural law of Onowaregeh [Great Turtle Island], the Women must take over our communities.  According to the Kaianerehkowa, [Great Law of Peace], we have the jurisdiction and duty to protect our children and the land we are bringing them into.  On these issues the men get their authority from us.

To implement our rights, all borders will now be fully monitored by the Ongwehonwe Women. Immigrants will no longer be told we are extinct or pacified. We will decide who comes onto our land and receives benefits from us.  Not foreign corporations who are wrecking everything and raping Mother Earth.  These artificial entities can no longer trespass on us. 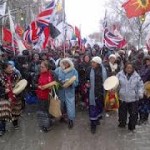 We demand control of all resources and immigration.  Their artificial economic system is based on debt, war, oppression and death.  We will end this.  Instead of declaring war, CEO “Pudge’ Harper of Corporation Canada must come to us and discuss their deficit owed to us, their landlords.

His Band councils set up under the genocidal “Indian Act” signed the illegal treaties [1, 2, 3, 4, 5, etc.}.  They are all fraudulent because they breach the Guswentha.  Their system is causing Theresa Spence’s hunger.  They and their supporters are the “Indian’ agents who are working with their masters to try to annihilate us.  They must step down and stand up their Council of Women under traditional law, the key to peace.  The councils and their followers can dissolve into the Corporation of Canada and leave our communities because they are in violation of the Guswentha.  We remind these Indian agents they have committed treason under the Great Law.

Where are those Indian cigarette millionaires who are abusing the Great Law to make themselves filthy rich?  Owistah is the disease that prevents us from becoming of one mind.  We must return to the ‘we’ to stop the white divide-and-conquer serpent.  As Sitting Bull said, “Money soon gone, but land is forever”.

There is no need for police, jails and imperialism.  Each person has a duty to act on behalf of the Great Law of Peace.  Our responsibility is to our Mother Earth everywhere.
Everyone can take shelter under the great Tree of Peace.

Nobody freed the Palestinians.  They freed themselves.   We Indigenous everywhere must also free ourselves.  We have to break the chains that bind. Everything comes from within each person.  We cannot rely on the invaders whose mandate is total extermination of us so they can have free title of the Western Hemisphere. 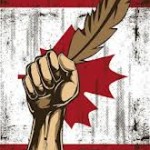 No one in the world can stop us from becoming free.   We are on the path to world peace, skennen, and the weather spirits are marching with us.